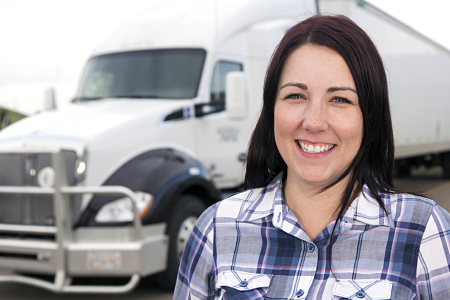 According to the American Trucking Associations (ATA), the industry is desperately trying to fill some 48,000 jobs—and that shortage could go up to 175,000 by 2024 as drivers retire and the demand for shipping and deliveries booms, in part due to the growing dominance of online retail.

The ATA pegs the average private-fleet trucker’s salary at $73,000 and the Bureau of Labor Statistics (BLS) puts the industry-wide median at around $40,000.

“Fleets consistently report receiving applications for open positions, but that many of those candidates do not meet the criteria to be hired,” said ATA Chief Economist Bob Costello. “According our research, 88 percent of carriers said most applicants are not qualified.”

The solution, at least partly, may be in the fairer – not weaker sex.

Women truck drivers, long considered off limits, are now squarely in the sights of a trucking industry hungry for new drivers.

Industry executives say a big challenge in the recruiting process is just convincing women that they’re welcome. “There have been a lot of stereotypes over the years about the independent, male truck driver in a macho industry, a macho career,” said Derek Leathers, president and chief operating officer of Werner. “That doesn’t work in favor of attracting women to the industry. … It’s just the simple idea of us making it very, very clear that we want them.”

“As a truck driver, you make the same amount of money as your male peers, because you either get paid by the mile or the load of the percentage. So gender is not an issue in pay in the truck industry for drivers,” said Ellen Voie, chief executive of the Women in Trucking Association (WIT).

Ryder System took design to another level in 2015 when it began leasing a “female-friendly” vehicle package. The fleet management company teamed with truck manufacturers and the WIT to offer shipping customers 15 specifications for trucks including adjustable seat belt shoulder straps and better access to oil and fuel ports.

At a company like Werner, a driver can make $50,000 to $60,000 in the first year. As more women get behind the wheel, the company is finding they tend to outperform male counterparts in several key, economical ways.

“Our female drivers have about a 25 percent lower accident cost,” said Leathers. “They’re having smaller accidents. They’re not having the big ones, if you will, where maybe the attention to detail is a little better, maybe the focus or maybe just the concern is something they bring to the party that just makes them better drivers.”

Voie, who founded WIT in 2007 after several decades in the trucking industry, said feedback from other companies supports the idea that female drivers can do the job. “What carriers are telling me is that they want more female drivers for the safety issue and … women are often better with the customers, paperwork, better with the equipment and often easier to train.”

WIT is serious about making inroads in the industry. WIT recently expanded its relationship with MindShare Strategies to provide support in operations, strategy, and membership growth and retention. MindShare Strategies provides clients in the transportation and logistics industries with a broad range of marketing, sales, and management capabilities that generate business results.

“Women In Trucking plays a significant role in advancing the roles of women in the industry, promoting their accomplishments, and minimizing obstacles they face,” said Voie. “As we continue to advance our mission and expand our membership and influence, we will need more advanced and scalable association management capabilities and resources. As an association management company that focuses in commercial freight transportation and logistics, MindShare Strategies is the ideal solution for us.”

“We are thrilled to offer Women In Trucking expanded association management expertise and resources that will advance their mission which is so critical to the North American transportation and logistics industry,” said Brian Everett, senior partner of MindShare Strategies. Everett will provide regular strategic counsel for the association.