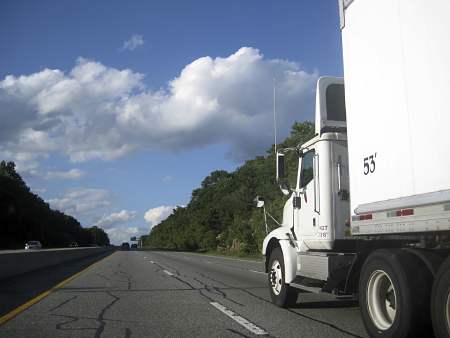 A survey conducted by the Owner-Operator Independent Drivers Association (OOIDA) shows that 75 percent of truckers will avoid Rhode Island if the state adopts Gov. Gina Raimondo’s proposal to toll trucks.

The RhodeWorks plan, proposed by Raimondo last year, aims to toll large commercial trucks traveling through Rhode Island to pay for repairs for the state’s crumbling roads and bridges.

In a letter to lawmakers, Rhode Island Department of Transportation Director Peter Alviti revealed where 14 toll gantries could be located. Six would be placed on I-95, three on I-295, and two each on Route 146 and Route 6 in Providence. However, Alviti emphasized that the list could change.

Representatives from the state’s trucking industry have condemned RhodeWorks, saying they shouldn’t have to shoulder the burden to pay for repairs and encouraging an increase in diesel gas taxes and trucking registration fees instead.

When truckers take their route out of the Ocean State, “Rhode Island-based businesses will face the brunt of this poorly thought-out plan,” said Christopher Maxwell, president of the Rhode Island Trucking Association. “The governor wants everyone to believe she is going to repair 453 bridges in five years. Does anyone really believe the Rhode Island Department of Transportation has the ability to repair 453 bridges in five years?”

Maxwell said drivers diverting away from Rhode will harm the state’s economy.

“We have repeatedly heard from the governor that diversion will not be a problem, this survey contradicts the governor’s assumptions. In 1953 Governor Roberts determined that Rhode Island was not a “corridor” state – time has not changed this reasoned conclusion. Long haul truckers will divert around Rhode Island,” he added.

Maxwell went on to offer an alternative option to the tolls.

“Our plan using increased fees on truck registrations, combined with an increase in the diesel tax, refinancing Garvee bonds and the influx of new federal money will create a revenue stream of nearly $300 million over the next five years vs. the governor paying $590 million to get $560 million. The numbers just don’t make sense,” added Maxwell.

The Rhode Island Trucking Association, Inc. has over 500 members and 10,000 employees and is a non-profit organization whose membership is made up of one truck owners; fleet owners; private and for hire motor carriers; and allied industries.

A survey of AAA members in the state found a majority of them support Raimondo’s proposal to fund bridge repairs with a toll on large trucks, the auto club reported.
The online survey of roughly 2,250 Rhode Island AAA members showed 55 percent support for Raimondo’s proposal, while 36 percent oppose the plan and 9 percent are neutral or have no opinion. The survey was conducted in November.

The results were similar to another survey on the topic commissioned last fall, that one by Bryant University’s Hassenfeld Institute for Public Leadership, which found 53 percent of registered Rhode Island voters back the toll proposal.

Lloyd Albert, AAA Northeast’s senior vice president for public and government affairs, said he commissioned the survey “to find out where our members stand on the issue.” He said the survey’s margin of error was 2.05% and the respondents were representative of AAA’s membership.

“I think what we were looking to get from the survey is a sense of what our members think about the transportation funding conundrum we’re dealing with right now,” Albert said. “We knew it would be a very hot topic in January and February.”

Albert said AAA is strongly in favor of Rhode Island leaders taking action to address the state’s worst-in-the-nation bridges, though he declined to say if the auto club would lobby for passage of RhodeWorks.

The AAA survey found 82 percent of its Rhode Island members think the state doesn’t spend enough money on repairing and maintaining its transportation system, and 59 percent rate the condition of the state’s roads and bridges as “poor.”