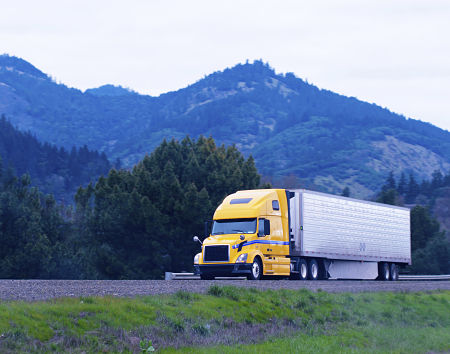 Eighty trucking industry and other logistics organizations are lobbying Congress to pass legislation that would prevent individual states from regulating the industry in conflict with existing federal rules and regulations.

Drivers from companies such as Ryder System, U.S. Express, Swift Transportation, J.B. Hunt Transportation Services and Werner Enterprises recently visited with members of the Committee on Commerce, Science and Transportation.

The truckers are trying to convince lawmakers to include in a bill language which would bar states from enforcing laws that go beyond federal rules governing truck routes and freight rates.

The bill in question is a Federal Aviation Authority reauthorization bill now working its way through Congressional committees.

At issue is whether states can pass and enforce regulations on how truck drivers are paid and how often they must rest. Several states require employers to pay employees for time spent waiting to load and unload while most trucking companies pay drivers by the mile.

In recent years, thousands of truck drivers have sued large trucking companies that employ them, claiming in class action cases they are owed back pay for time spent refueling, taking meal and rest breaks or loading shipments. The language in the aviation bill being considered would likely halt lawsuits for back pay brought by drivers in California.

A similar provision, sponsored by Rep. Jeff Denham (R-Calif.) was included in the House version of the highway funding bill, but was dropped from the final version before it was passed and then signed into law by President Barack Obama in December.

“A single set of consistent and fair regulations is essential to the trucking industry,” said ATA President and CEO Bill Graves. “Language currently being discussed by Congressional leaders would ensure that drivers operate under a consistent set of break rules, whether that driver is delivering a trailer full of water to Flint, Mich., or picking up a load of avocados in Temecula, Calif. That’s what Congress sought to establish with a 1994 law, and recent interpretations of that law by the courts are threatening that consistency.”

Language in the FAA Authorization Act of 1994 made it clear states are not permitted to institute rules governing the trucking industry because Congress wanted the industry to operate under a single, uniform system from coast-to-coast rather than a confusing and inefficient patchwork of state laws. However, some states – notably California – a handful of courts, and aggressive plaintiffs’ attorneys are refusing to faithfully uphold that goal of one country, one set of rules, according to ATA.

“If lawmakers do not address this overreach by the states and the courts, they will destroy the unified national rules that Congress intended trucking to operate under,” Graves said. “And moreover, if opponents of this provision succeed in blocking this common sense fix, it only will make an already difficult job unnecessarily complex.”

Though support for the new language is broad, it is not unanimous.

Both the International Brotherhood of Teamsters and the Owner Operator Independent Driver Association (OOIDA) oppose including the language in the FAA bill.

“The Teamsters raised the warning flag late last year when some in Congress tried to include language in a long-term transportation funding bill that would have overridden the decision of 22 states to require truckers to take meal and rest breaks,” said James P. Hoffa, the union’s general president. “Now lawmakers are at it again, using the FAA bill to endanger motorists all across the country.

“These elected officials are doing the bidding of the American Trucking Association, which wants drivers on the clock as much as possible for time behind the wheel,” he continued. “In fact, the provision would also limit how a truck driver could be paid and not even compensate them for safety procedures like performing pre-trip inspections. In addition to robbing drivers of pay, the language could prevent drivers from collecting workers’ compensation and sick leave benefits, among other worker benefits. In short, it overrules the fundamental principle that all workers should be paid for the time they work.”

In a “call to action” issued to its members, OOIDA said the effort was “an ambitious overreach” that would limit the states’ ability to address pay issues.

The association also stated that Section 611 of the bill “could unravel mandated fair pay for drivers and would empower large carriers to further reduce driver wages. It would also gut the ability for states to address critical items like payment for detention time.”