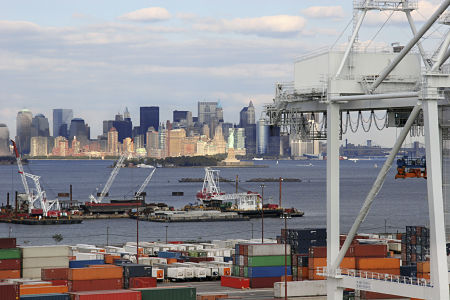 The Port Authority recently announced it was committing an additional $1.2 million to the $9 million it expects to receive in federal grants for its Truck Replacement Program.

The Port Authority hopes to build on a 33 percent reduction in emission pollutants realized since 2006 as port of its seaport environmental initiatives.

The Port Authority’s plan is not as ambitious as earlier versions of the plan that called for banning pre-2007 model year diesel trucks from entering the ports by January 2017.

“Your decision to reverse course on replacing older polluting trucks is especially disappointing given that in the past few years the terminals in Newark and Elizabeth have seen a significant rise in congestion and long lines at the gates,” the EPA wrote to Port Authority Executive Director Patrick Foye.

The $10.2 million in funds for the agency’s Truck Replacement Program will provide grants for a portion of the replacement truck cost with the goal of replacing approximately 400 trucks with model year 1994 and 1995 engines that now call on the port. New trucks registered to operate in the port will be required to meet or exceed federal EPA on-road emissions standards for 2007 model year heavy-duty diesel-fueled engines.

The approximately 400 newer trucks would result in emissions reductions of approximately 184 tons of fine particulate matter and 3,843 tons per year of nitrogen oxides over the remaining useful lives of the vehicles being replaced. This is the equivalent of taking more than 56,000 automobiles off the road each year, based on an EPA formula.

In addition, the Port Authority has proposed a modification to the rules and regulations for operating at its marine terminals tariff. The modifications would deny access to trucks with model year 1994 and 1995 engines effective January 1, 2018, and also to require that new trucks seeking to serve the port terminals must be equipped with a 2007 or newer model year engine. These proposed changes to the tariff are currently under consideration.

The Port Authority also has established as a goal that all trucks serving its marine terminals be equipped with 2007 or newer engines, and is working closely with financial institutions to explore whether low-interest loans can be made available to truckers for the replacement of trucks serving the port with model year 1996 to 2006 engines. The Port Authority also will continue to pursue additional grant funding in support of the Truck Replacement Program.

“Our goal is to balance the need to efficiently and effectively move goods to and from our port terminals, while continuing to be good environmental stewards to the communities that surround our port facilities,” said Port Authority Port Commerce Director Molly Campbell. “We believe our plan achieves this balance and will ensure that we continue to systematically address this issue for all stakeholders.”

Since the Truck Replacement Program began in 2010, the Port Authority has facilitated the replacement of 429 trucks with newer models. The program has resulted in an estimated emission reduction of 157 tons of fine particulate matter and 4,122 tons of nitrogen oxide for the remaining useful life of the vehicles which were replaced.

In addition to the truck program, the Port Authority, through its Clean Air Strategy for the Port of New York and New Jersey, has implemented other emission reduction actions at its port facilities, including the investment of more than $600 million in environmentally friendly rail facilities at all of its port terminals – including the recently approved rail facility to serve Global Terminal in Jersey City – which are funded primarily through the agency’s Cargo Facility Charge. In addition, the agency has provided incentives to modernize cargo-handling equipment and to encourage the use of low-sulfur fuel in ocean-going vessels as well as to attract the cleanest vessels to the port; and incentives to retrofit port switcher locomotives with ultra-low emitting GenSet engines.