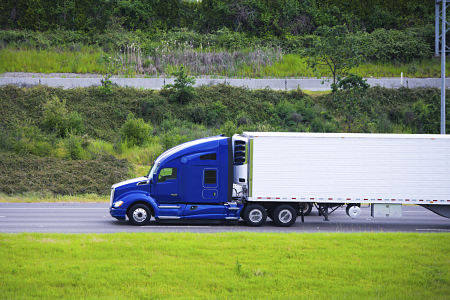 Perceptions, it is held, are difficult to change.

But Trucking Moves America Forward (TMAF), the industry-wide image and education movement, is making significant strides in its mission to change the nation’s perception of the trucking industry.

At a recent trade show in Louisville, TMAF chronicled a year of making a difference.

“After a successful first year, we knew there was still much that needed to be done to work toward changing perceptions and building a more positive image of the trucking industry, and I’m happy to say we’ve exceeded expectations to date,” said Burch. “I want to sincerely thank all of our members and supporters for helping us come this far since launching TMAF two years ago.

“I’m especially proud to announce today that we now have achieved our goal of putting more than 100 TMAF-branded trailer wraps on the road,” said Burch. “These ‘moving billboards,’ each seen by as many as 16 million people per year, are sending a message every day that our industry is more than just large vehicles on the highways; we’re moving America forward by transporting the products and freight that make life possible, serving as an essential provider to our communities and adding value to our economy.”
Leaders of TMAF and professional drivers presented an overview of the movement’s other major accomplishments through its consistent and dedicated marketing, education and recruiting efforts throughout 2015. To date, TMAF is pleased to announce the following achievements:

“There is a lot that we can celebrate today – and I’m especially encouraged by the way in which TMAF has supported the rights of drivers while connecting our entire industry,” said Spencer. “I look forward to seeing TMAF continue to expand, because whether you’re an owner, driver, supplier, or other industry professional, the movement helps shine a positive light on one’s career and contributions.”

Professional truck driver Don Logan with FedEx Freight and an America’s Road Team Captain, also spoke about the important role TMAF has played in improving the image of truck drivers across our nation’s roads and highways.

“Millions of people contribute to the story of the trucking industry and, as drivers, we recognize that we are the face of the industry,” said Logan. “We take that responsibility seriously, and that’s why we’ve seized the opportunity – with the help of TMAF’s many resources – to show how safety on the road, respect for fellow drivers, and commitment to our communities are central to our professional roles.”

Throughout 2016, TMAF’s goals will be to continue to activate and engage the industry through education sessions, speeches, marketing and public relations strategies; support local and state advocacy efforts focused on improving highway infrastructure and the operational environment; develop strategies for the public message by aligning with research measurements; continue to build pride within the trucking industry to make trucking an attractive career option; and encourage fundraising at all levels of contributions, big and small.

There is also a goal to see an additional 200 trailer wraps on the road.