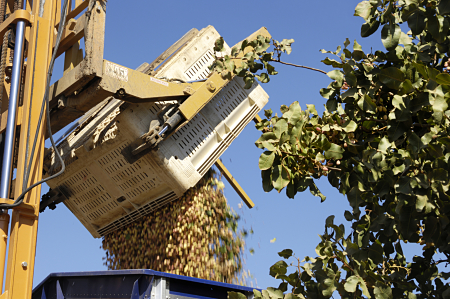 California’s rich harvest of almonds, walnuts, pistachios and other nuts find their way to tables and pantries across the world.

Thieves, however, have joined the list of those seeking California’s valuable nut harvest.

“Tree nut theft is still a serious issue this year, as it was last year. Folks behind the thefts have not been caught. We’ve had over 30 thefts in the last 6 months,” said Roger A. Isom, Western Agricultural Processors Association (WAPA) president and CEO.

“We’ve had numerous attempts thwarted,” said Isom. “Because folks have started to implement some of the procedures that we talked about at our emergency Tree Nut Cargo Theft Summit back in December.”

“We brought experts in cargo theft from across the country to the training seminar held in mid-April in Modesto to make sure all members understood: What has happened? How are the thefts occurring? What have we learned from those thefts and the investigations? What can people do to prevent these thefts from happening at their locations?” he said. “What we’ve learned, for sure is that if you do not implement the procedures, you will be hit. Following the December meeting, we’ve had companies hit by cargo theft; the companies that implemented the practices we talked about prevented thefts from occurring; those that did not have lost truckloads of tree nuts.”

Isom said tracking a stolen truckload is difficult. “Typically they do get the license plate number. Prior to these thefts, they might have just asked the driver for the license plate number and taken his word for it. Maybe they would go to the extent of taking a picture of the plate, but what if it is what they call a cold plate, a stolen plate?”

“These crimes impact all sectors of California’s economy, including agriculture, retail, and technology,” Olsen wrote in a bill analysis.

Cargo theft has been on the rise in California. Investigators suspect domestic and international organized crime is involved, but local law enforcement agencies have been unable to adequately respond due to a lack of resources and the inability to coordinate statewide, according to Olsen.

In an effort to address the issue, the Assembly Public Safety Committee voted unanimously to advance a bill to create a task force to develop and adopt standards for detecting and tracking theft.

The task force would also be responsible for setting up a program to focus on tree nut industry thefts.

Advocates say there have been more than 30 incidents of tree nut theft in the past six months. During that time, the losses of almonds, walnuts, cashews, and pistachios have exceeded $18 million.

Representatives of the nut industry say thieves pose as legitimate truck drivers, create fraudulent paperwork and pick up cargo, and even hack into truck routing systems to divert unsuspecting haulers to locations where thieves take the contents.

Numerous efforts are underway to combat the problem but supporters say they need a proactive statewide task force on cargo theft to help address the issue.

According to the Federal Bureau of Investigation, losses from cargo theft in the United States could reach $30 billion annually.