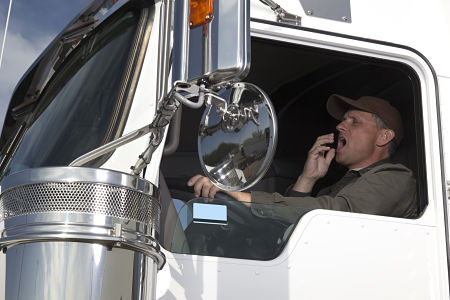 The American Transportation Research Institute (ATRI) recently released the results of its sleep apnea survey, which highlights a number of issues related to truck driver screening and treatment of Obstructive Sleep Apnea (OSA).

With data from more than 800 commercial drivers, ATRI’s report is the first to quantify the costs and other impacts that truck drivers are experiencing as they address diagnosis and potential treatment regimen for OSA.

“ATRI’s research clearly shows what my fellow drivers and I have been experiencing. The costs associated with sleep apnea screening and treatment are not inconsequential for drivers and the flexibility to utilize lower cost options for both screening and treatment will be critical if FMCSA moves forward with a formal rulemaking,” said Barbara Beal, an owner-operator and member of OOIDA.

As a result of ATRI’s study, the Owner-Operator Independent Drivers Association (OOIDA) requested and received an extension to the Federal Motor Carrier Safety Administration’s comment period on its intent to develop a rule dealing with sleep apnea among truck drivers.

OOIDA asked for the extension to allow time to further review ATRI’s findings. FMCSA extended the comment period to July 8.

In a series of public listening sessions, FMCSA gathered the opinions of dozens of drivers, sleep specialists, and medical examiners on the subject.

“We want drivers to engage in the process and understand this isn’t just a regulatory activity to put new burdens and responsibilities on them,” said FMCSA Associate Administrator for Policy Larry Minor. “But we’re interested in their health and wellbeing, especially when they’re in a safety sensitive capacity.”

FMCSA and the Federal Railroad Administration (FRA) hosted listening sessions in Washington, D.C., Chicago and Los Angeles in May to solicit information on the prevalence of moderate-to-severe obstructive sleep apnea (OSA) among individuals occupying safety sensitive positions in highway and rail transportation, its potential consequences for the safety of rail and highway transportation, and the potential costs and benefits from regulatory actions that address the safety risks associated with motor carrier and rail transportation workers in safety sensitive positions who have OSA.

The listening sessions were intended to provide interested parties with an opportunity to share their views on this topic with representatives of both agencies, along with any data or analysis they may have.