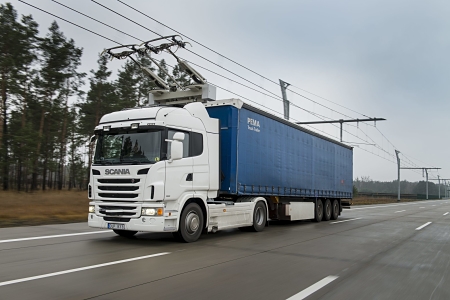 Scania Trucks and Siemens AG have teamed up with the Swedish government to demonstrate the first electric highway, a two-kilometer stretch of the E16 motorway near Gavle in central Sweden.

The Swedish government is touting the demonstration as a path towards fossil-free transportation. Scania is supplying the electrically-powered trucks using conductive technology developed by Siemens.

The beauty of the new technology, which is the result of several years of cooperation between the Swedish Government and the private sector, is that it permits the trucks to operate as electric vehicles when on the electrified road and as regular hybrid vehicles at other times. All the Scania trucks on the road are hybrid and Euro 6-certified, running on biofuel.

“The electric road is one important milestone on the journey towards fossil-free transport. Scania is committed to the success of this project and is committed to sustainable transport solutions,” said Claes Erixon, Scania’s head of research and development.

The truck receives electrical power from a pantograph power collector that is mounted on the frame behind its cab. The pantographs are in turn connected to overhead power lines that are above the right-hand lane of the road, and the trucks can freely connect to and disconnect from the overhead wires while in motion.

When the truck goes outside the electrically-powered lane, the pantograph is disconnected and the truck is then powered by the combustion engine or the battery- operated electric motor. The same principle applies when the driver wants to overtake another vehicle while on the electrified strip of the road.

Scania sees the electric road as being a key component in achieving Sweden’s ambition of an energy-efficient and fossil-free vehicle fleet by 2030. It can also help to strengthen Sweden’s competitiveness in the rapidly-developing area of sustainable transport.

Nils-Gunnar Vågstedt, who is responsible for Scania’s research into electrification, adds, “The potential fuel savings through electrification are considerable and the technology can become a cornerstone for fossil-free road transport services.”

The investment in the Electric Road E16 program in Gävle is a result of a program for the public procurement of innovative solutions that was launched by Swedish authorities. The program consists of funding from national and regional funding sources.

The Swedish transport authority Trafikverket, the Swedish Energy Agency Energimyndigheten, innovation agency Vinnova, Scania and Siemens are the main funders of the technology. The project is being coordinated by the Gävleborg Region.

The electric road is only one of several pioneering technologies that Scania is working on to help the spread of sustainable solutions within both urban and long-haul transport. The company is also developing technologies for alternative fuels, hybridized and fully-electric vehicles, and autonomously and wirelessly-connected transport in parallel with its work to further enhance and refine the products of the future.

The demonstration will last for two years. The trial will use two diesel hybrid vehicles manufactured by Scania and adapted, in collaboration with Siemens, to operate under the catenary system.

“The Siemens eHighway is twice as efficient as conventional internal combustion engines. The Siemens innovation supplies trucks with power from an overhead contact line. This means that not only is energy consumption cut by half, but local air pollution is reduced too,” said Roland Edel, chief engineer at Siemens Mobility Division.

Transport accounts for more than one third of Sweden’s CO2 emissions, with almost half of that coming from freight transport. As part of its climate protection strategy, Sweden has committed to having a fossil fuel independent transport sector by 2030.

During the two-year trial, Sweden’s Transport Administration Trafikverket and Gävleborg County want to create a knowledge base on whether the Siemens eHighway system is suitable for future long-term commercial use and further deployment.

“By far the greatest part of the goods transported in Sweden goes on the road, but only a limited part of the goods can be moved to other traffic types. That is why we must free the trucks from their dependence on fossil fuels, so that they can be of use also in the future. Electric roads offer this possibility and are an excellent complement to the transport system,” said Anders Berndtsson, chief strategist at the Swedish Transport Administration.

Siemens is currently developing another eHighway demonstration project in California. This project is being undertaken in collaboration with vehicle manufacturer Volvo and the South Coast Air Quality Management District (SCAQMD). Tests will be conducted throughout 2017 to see how different truck configurations interact with the eHighway infrastructure in the vicinity of the ports of Los Angeles and Long Beach.