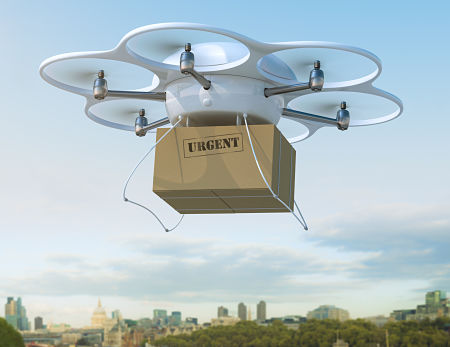 The scenario sounds futuristic – a delivery truck rolls into a neighborhood, stops at the curb and a hatch opens on the roof, dispatching a drone that drops a package on the doorstep.

This is how companies plan to change the delivery industry: with tiny airborne robots clutching small packages.

HorseFly is testing its drone deliveries under an exemption from the Federal Aviation Administration (FAA), which recently released its rules on Unmanned Aerial Systems (UAS), more commonly known as drones.

“This test delivery was made possible by our receipt of the Section 333 Exemption from the FAA. As one of a small handful of companies to have received that exemption for drone deliveries, we are in a unique position to actually test a delivery from a truck,” said Burns.

HorseFly is an eight-rotor “octocopter,” designed to be used in tandem with Workhorse Group’s EPA-approved electric work trucks. Weighing 15 pounds empty, HorseFly has a payload capacity of 10 pounds; it can achieve a maximum speed of 50 mph and a flight time of 30 minutes.

The HorseFly UAS, which is subject to FAA approval for commercial use, is designed to be given a package and a delivery destination by a delivery driver, using a touchscreen interface in the delivery truck. The HorseFly has the ability to launch itself from the roof of the delivery vehicle and ascend to a safe cruising altitude and then navigate to the desired delivery point—say, a house’s front stoop—autonomously, using GPS navigation.

The FAA’s new rules limit commercial drones to 55 pounds. They can fly during daylight hours but have an altitude ceiling of 400 feet. The agency has called integrating unmanned aircraft into the National Airspace System a top priority and has granted close to 4,000 companies an exemption in order to test the technology’s feasibility, with the requirement that the drones remain within the operator’s line of sight.

“Our plan is to safely integrate drones by developing the right policies, regulations, technologies and procedures incrementally,” said the FAA Administrator Michael Huerta. “Unmanned aircraft are already performing a number of important tasks, from inspecting aging infrastructure to monitoring crops and wildlife. And, we’re educating the public.”

The FAA said in its annual forecast that combined sales for hobbyist and commercial drones could nearly triple from 2.5 million units this year to 7 million in 2020.

Acknowledging that development of drone technology is accelerating, the FAA announced in May it is establishing a drone advisory committee to guide the agency on integrating drones into its airspace regulations.

“Every week it seems someone comes up with a new technology or a new use for these amazing aircraft,” said Huerta said. “We’ve come a long way from where we were just a handful of years ago.”

Earlier this year, DHL conducted a three-month test of its drone system in a small Bavarian town.

The German shipping firm’s drones carried over 100 parcels with full autonomy through rural and sometimes difficult terrain. The tests have emboldened DHL to set its sights on the arrival of urban drone deliveries.

DHL was the first company worldwide to utilize drone technology to deliver parcels to customers, according to the company.

During the three-month trial, residents were invited to drop off shipments in “pack stations” – centers of parcel lockers run by the company for drones to carry off to another pack station, all without human aid.

The Bonn-based company has dubbed its fleet of drones “parcelcopters,” which it first began testing in 2013. It aims to integrate them into its logistics chain to complete the “last mile” of deliveries.

DHL reported that its drones successfully carried out “a series of flawless flights” under difficult conditions, which included heavy loads, long distances and challenging alpine geography.

Round-trips up onto a plateau near the village tallied eight kilometers (five miles) and delivered mostly sporting goods and medicine within eight minutes.

“We have achieved a level of technical and procedural maturity to eventually allow for field trials in urban areas as well,” said Jürgen Gerdes, DHL’s board member for e-commerce parcel delivery. The company has been developing the technology with a university in the western German city of Aachen.