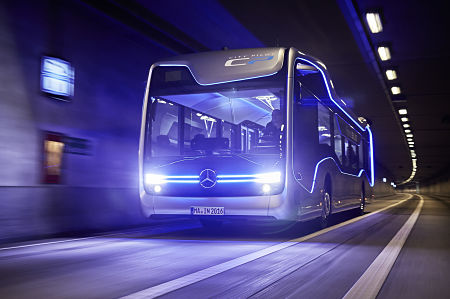 The Future Bus was controlled by Daimler’s CityPilot, adapted from the company’s Highway Pilot software.

“We showed nearly two years ago with our Highway Pilot that autonomous driving will make long-distance truck transport safer and more efficient. We are now putting that technology into our city buses with CityPilot,” said Daimler’s Dr. Wolfgang Bernhard. “This makes public transport safer, more efficient and more productive. More people can travel from A to B quickly, punctually and in comfort.”

“In addition to our strong product range, it’s above all our technological competence and innovative strength that make Daimler Buses so successful worldwide. The Mercedes-Benz Future Bus with CityPilot once again demonstrates our leading role in the bus business. We will claim this position also in the future. The advantages of CityPilot for our customers are clear. Our Future Bus operates fuel efficiently and with minimal stress on the engine. That has a positive impact on operating and maintenance costs, vehicle lifetime and availability,” said Hartmut Schick, head of Daimler Buses.

The bus was driven autonomously for on a route of approximately 20 kilometers in Amsterdam. The bus drove at speeds up to 70 km/h, stopped to the nearest centimeter at bus stops and traffic lights, passed through tunnels, braked for obstacles or pedestrians and communicated with traffic signals. The onboard driver monitored the system.

With Future Bus, the driver does not press the accelerator or brake pedal and does not steer, because any driver activity overrules CityPilot – the driver is always in charge of driving and can take over at any time. CityPilot comprises current assistance systems, those used in Mercedes-Benz coaches for example, as well as additional systems, some of which have been taken over from Daimler Trucks and further developed for urban traffic. The equipment includes long- and short-range radar, a large number of cameras and the satellite-controlled GPS navigation system. The intelligent connectivity of the cameras and sensors is pioneering and allows a precise picture of the surroundings and the exact position of the bus.

Future Bus has a look that goes with its name. The Daimler Buses team has developed a specific, attractive vision for public transport that breaks with many conventions.

For example, it appeals with an asymmetrical and thus more modern and attractive exterior design. The interior is open and light. The completely low-floor bus is divided into three areas: The “service” area is at the front near the driver; the “express” area for short journeys with a focus on standing room and quick passenger flow is in the middle.

Behind that is a “lounge” area where passengers spend more time. Their smartphones can be charged wirelessly, inductively that is. The completely redesigned cockpit is an integrated part of the whole space. The driver receives the required information on a large display in an innovative presentation style, and can concentrate fully on his or her core tasks. An electronic ticket system dispenses with the conventional selling and checking of tickets by the driver. The ticket system is an important element of the bus’s connectivity.

Daimler believes the Future Bus will be ideal for bus rapid transit (BRT) applications. BRT offers a constant route in a separate lane, a clearly defined schedule and clear and identical procedures at bus stops. Public-transport buses on BRT lines are predestined for autonomous driving, according to the company.

In Amsterdam, CityPilot had no problems maneuvering from Schiphol Airport to the city of Haarlem. The nearly 20-kilometer route presented the Future Bus with a genuine challenge. It has plenty of bends, passes through tunnels and traffic lights. The bus easily mastered the route.

The advantages of BRT systems are that they are quick to establish for urban and traffic planners, as well as being inexpensive and flexible. They reduce traffic as well as exhaust and noise emissions, increase journey speeds and thus improve the overall quality of life.

According to experts, there are now about 180 BRT systems on all continents with a total fleet of approximately 40,000 buses. They convey some 30 million passengers every day. New BRT routes are being planned and designed all the time. South America is regarded as a BRT region with its rapidly growing metro areas making good use of BRT systems.