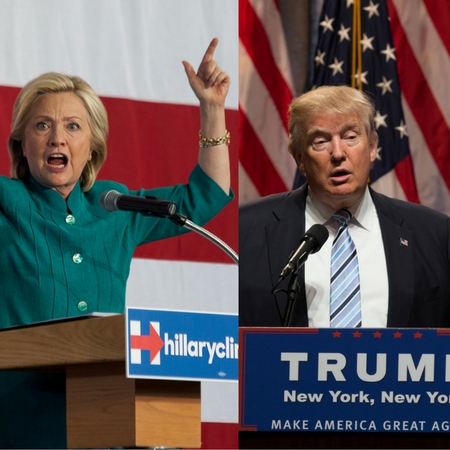 As the political season moved away from the conventions in July to the final dash to November, each party released its official platform, spelling out their foundational positions.

Trucking, for all of its lobbying efforts and donations, did not make an appearance in either party’s platforms.

Both parties talk about infrastructure investment – which is related to trucking in the United States.

The GOP’s platform calls for greater private sector funding of highways and bridges and wants to keep spending levels where they are.

The Democrats say they want to increase federal spending on infrastructure.

The GOP wants to protect the Highway Trust Fund from encroachments. ““More than a quarter of the fund’s spending is diverted from its original purpose,” the party notes, citing spending on aesthetic treatments and bike trails as the type of projects siphoning funds from the highways. “These worthwhile enterprises should be funded through other purposes,” the party’s platform says.

The Republicans say an expansion of public-private partnerships is the way to enhance funding. “Recognizing that, over time, additional revenue will be needed to expand the carrying capacity of roads and bridges, we will remove legal roadblocks to public-private partnership agreements that can save the taxpayers’ money and bring outside investment to meet community’s needs.”

The Democratic platform promises to expand federal investment in infrastructure.

Trump recently departed from the GOP platform when he advocated spending at least twice as much as his Democratic opponent on new infrastructure as part of his plan to stimulate the United States’ economy.

Trump said he would pay for the increased spending with an infrastructure fund that would be supported by government bonds that investors and citizens could purchase.

“We’re going to go out with a fund,” he said. “We’ll get a fund, make a phenomenal deal with low interest rates and rebuild our infrastructure. We’d do infrastructure bonds from the country, from the United States.”

Trump’s plan is similar to one advanced by Lawrence Summers, director of President Obama’s National Economic Council. At a Democratic National Convention round table, Summers said the United States should invest between $1 trillion and $2 trillion in infrastructure over the next 10 years.

“If we are serious about reversing the decline of the middle class, we need major federal investments to rebuild our crumbling infrastructure and put millions of Americans back to work in decent paying jobs in both the public and private sectors,” the Democratic platform reads. “We will put Americans to work updating and expanding our roads, bridges, public transit, airports, and passenger and freight rail lines.”

The Clinton campaign rejected the idea that Trump has serious ideas for rebuilding American infrastructure. “Donald Trump’s only actual infrastructure proposal is to build a giant wall on the Mexican border and have Mexico pay for it,” said Brian Fallon, a spokesman for Clinton. “Only one candidate in this campaign has put forward a specific and credible plan for investing in our nation’s infrastructure, and that’s Hillary Clinton.”

“The one thing we know about infrastructure spending is it’s going to happen,” says economist Peter Morici of the University of Maryland. “It’s one of the few things Hillary promises to do within the first 90 days. Now Trump is saying he wants to do it.”