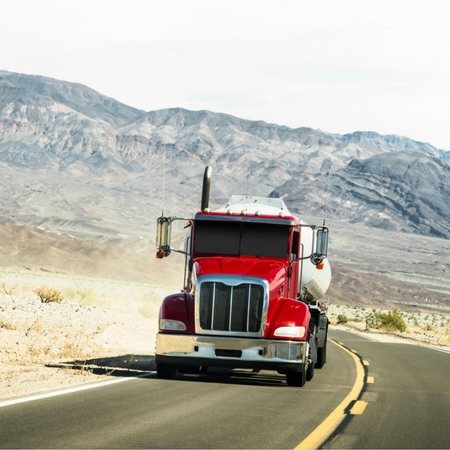 Officials said the new standards would require up to a 25 percent reduction in carbon emissions for big tractor-trailers over the next 10 years, and somewhat smaller improvements for delivery trucks, school buses and other large vehicles.

The carbon-reduction target is 10 percent more than when the rules were proposed last year, and was made tougher after a public comment period.
“We are way out ahead of any other country,” said Gina McCarthy, the administrator of the EPA.

Transportation Secretary Anthony Foxx said the trucking industry would save an estimated $170 billion in fuel costs through 2027 and reduce petroleum consumption by two billion barrels over the lifetime of the vehicles sold under the new rules.

“We are at a pivotal point in our fight against climate change and its catastrophic consequences,” said Foxx.

The agencies say heavy duty vehicles account for more than 20 percent of carbon pollution from transportation.

“These actions will give our trucks and manufacturers a competitive edge and, over the lifetime of the vehicles sold through the program. This reduction is the equivalent of taking nearly all the cars in the United States off the road for a year. And by lowering fuel costs and reducing shipping costs, these actions will help Americans save money on the products we buy,” he said.

The new rules will promote a new generation of cleaner, more fuel efficient trucks by encouraging the wider application of currently available technologies and the development and deployment of new and advanced cost-effective technologies through Model Year 2027.

The program, which EPA and DOT worked closely with the California Air Resource Board to finalize, includes carbon and fuel efficiency standards for certain trailers used with heavy-duty combination tractors for the first time; creates certainty by creating standards that increase over a period of 10 years; allows manufacturers to achieve the standards through a mix of different technologies; yields fuel savings that more than offset the costs and have favorable payback periods for truck owners; encourages manufacturers to continue to build a single fleet of vehicles and engines for the entire U.S. market; establishes complete vehicle standards and enhanced test procedures that incentivize holistic technology approaches for further real world improvements; and improves the agencies’ ability to measure industry’s performance and enforce compliance drawing from extensive data and stakeholder feedback related to actual vehicle performance.

Additionally, based on input and technical data received during the public comment period, the final program achieves 10 percent more carbon emission and fuel consumption reductions than the proposed standards. The program achieves these benefits through:

The agencies also announced that the U.S. Department of Energy (DOE) is investing nearly $140 million to improve vehicle and truck efficiency. DOE plans to invest $80 million in funding to develop the next generation of fuel efficient truck technologies. DOE will also invest $57 million in new projects to develop and deploy a wide array of cutting-edge light duty vehicle technologies.