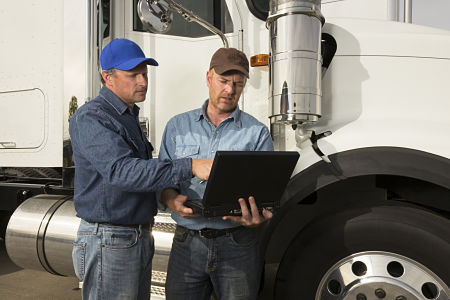 As the trucking industry hurtles faster toward a day of autonomous trucks guided by satellites and onboard computers, the dangers of cybersecurity breaches loom as real threats.

The Travelers Insurance Companies recently released its annual risk survey, in which they asked the business community and consumers what risk issues they were most concerned with.

Though financial, personal safety and personal privacy and identity theft topped the list, cyber, computer and technology/data breaches were a concern among 51 percent of the respondents.

“Our findings reveal common risks that business leaders and consumers may not be fully prepared to manage,” said Patrick Gee, senior vice president of claim at Travelers.
“The good news is there are steps they can take to help mitigate those risks and protect their families, finances, homes and businesses.”

Nearly half (45 percent) of business leaders worry about the emerging risks associated with increased automation and internet connectivity. Thirteen percent report being very confident that they have implemented best practices to avoid a cyber incident. Eighty-one percent lack confidence in the steps they should take in the event of a cyber breach, and 32 percent have a data breach response plan in place.

In August, Senators Edward J. Markey (D-Mass.) and Richard Blumenthal (D-Conn.), members of the Commerce, Science and Transportation Committee, sent a letter encouraging the Federal Communications Commission (FCC) to consider taking a number of steps to protect consumers’ safety and privacy as car manufacturers deploy vehicle-2-vehicle and vehicle-2-infrastructure technologies in their automobiles. These technologies use Dedicated Short Range Communications (DSRC) to share speed, direction data, and other transportation information to prevent accidents and reduce congestion. While these technologies are promising, they could increase vehicles’ vulnerability to cyber and privacy threats.

“We have entered the Internet of Things (IoT) era, where our cars, transportation infrastructure, and devices can all be interconnected,” wrote Senators Markey and Blumenthal to FCC Chairman Tom Wheeler. “But make no mistake, IoT can also be considered the Internet of Threats if appropriate safety, cybersecurity, and privacy safeguards are not put in place. We must ensure that these vehicles have robust safety, cybersecurity, and privacy protections in place before automakers deploy vehicle-2-vehicle and vehicle-2-infrastructure communication technologies.”

Last year, Senators Markey and Blumenthal introduced the Security and Privacy in Your Car (SPY Car) Act, legislation that would direct the National Highway Traffic and Safety administration and the Federal Trade Commission to establish federal standards to secure our cars and protect drivers’ privacy. The SPY Car Act also establishes a rating system — or “cyber dashboard”— that informs consumers about how well the vehicle protects drivers’ security and privacy beyond those minimum standards.

In 2015, Senator Markey released the report Tracking & Hacking: Security & Privacy Gaps Put American Drivers at Risk, which detailed major gaps in how auto companies are securing connected features in cars against hackers. For example, only two of the 16 car companies had developed any capability to detect and respond to a hacking attack in real time and, and most customers don’t even know that their information is being collected and sent to third parties.

As technology improves auto safety, the industry must find ways to keep those systems secure. Vehicle-to-vehicle and vehicle-to-infrastructure technology have the potential to vastly reduce collisions, as cars and trucks talk to each other and warn drivers when there’s an icy patch ahead or another car stopped just around the curve.

But this also poses a data-security risk — one that is more immediate and visceral than privacy invasion. According to McKinsey, 43 percent of new car buyers say they are worried that hackers will tamper with their brakes or safety systems.

“You can’t have vehicles communicating reliably with one another if you don’t have a secure network,” says Paul Laurenza, a Dykema attorney who focuses on transportation safety.

Joshua Corman, who leads the Atlantic Council’s Cyber Statecraft Initiative, says the industry has to be nimble when it comes to the IoT.

“Every company is becoming a software company. Toyota woke up one day and wasn’t just a computer on wheels, but a data center on wheels.”