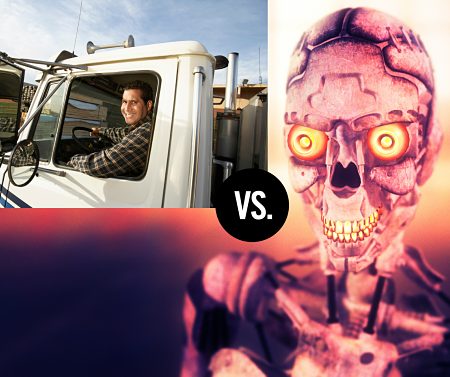 Autonomous trucks, those marvels of technology that can drive our nation’s highways without a driver in control, are rapidly approaching full blown implementation.

Daimler Trucks is testing the autonomous truck on Nevada highways and across the sea the trucks and their technology are being tested.

Tesla CEO Elon Musk told a conference audience in May that self-driving vehicles were one example of how artificial intelligence could create a “tremendous upheaval in terms of employment.”

The reviews are mixed.

Uber CEO Travis Kalanick told Business Insider that human-piloted Ubers would be necessary and predicted that autonomous vehicles would create new jobs in the area of fleet maintenance.

Andy Stern, former president of the Service Employees International Union, says it is conceivable that 3.5 million truck drivers could be replaced in the next few decades.

Trucking is the largest occupation in 29 states. Morgan Stanley conservatively estimates that the freight industry could save as much as $168 billion annually by harnessing autonomous technology—$70 billion of which would come from reducing staff.

“Commercial truck driving is going to be the leading edge of a tsunami of labor displacement,” said Stern. ‘It’s not something the next generation is going to have to deal with — it’s going to happen in the next decade.”

Truck drivers, he noted, support a vast web of workers whose own jobs may be imperiled.

“We’re talking millions of jobs: the drivers themselves, but also the people in insurance, repairs, restaurants, hotels,” Stern said. “I think it’s incredibly irresponsible that no one’s making plans for this.”

Derek Rotz, director of advanced engineering for Daimler Trucks North America, said his company has no plans to develop trucks that drive without human intervention.

“Drivers are aging rapidly, are nearing retirement, and new recruits have not filled the void,” Rotz said. “Current trends show the shortage increasing in the coming years. Technology, including safety systems, autonomous systems and connectivity, would make trucks and truck driving as a profession more attractive to the next generation of drivers.”

Uber got into the trucking business with its recent acquisition of Otto, which is developing a self-driving kit to retrofit existing trucks. Otto says the retrofitted trucks will always need a driver on board.

“We don’t think we’ll replace drivers,” said Eric Berdinis, Otto product lead. “There’s lots of complexity around loading, unloading, paperwork, weigh stations, police, refueling. To automate those aspects is not possible. We see this as a way to extend the amount of time truck drivers can drive safely.”

Bill Graves, former head of the American Trucking Associations (ATA), says autonomous technology will have a significant impact on the industry.

“Whether it’s called driverless or automated or smart, the rapid development of automated vehicle technology has the power to transform our industry in many ways,” said Graves. “We see the basis for these systems in the market today, helping to improve safety and efficiency, and from here the technology will only get better and more pervasive. However, there are still questions that need to be answered as we head down this path. We are eager to work with vehicle manufacturers, the auto industry and regulators, but we need to ensure that these emerging technologies don’t compete with one another to the point that settling in on something that genuinely works and is capable of being widely deployed will be impossible.”

On Sept. 20, the U.S. Department of Transportation issued its federal policy for automated vehicles, laying a path for the safe testing and deployment of new technologies that have enormous potential for improving safety and mobility for Americans on the road.

“Automated vehicles have the potential to save thousands of lives, driving the single biggest leap in road safety that our country has ever taken,” said U.S. Transportation Secretary Anthony Foxx. “This policy is an unprecedented step by the federal government to harness the benefits of transformative technology by providing a framework for how to do it safely.”

NHTSA Administrator Dr. Mark Rosekind said the elimination of human error could be monumental. “Ninety-four percent of crashes on U.S. roadways are caused by a human choice or error,” said Rosekind. “We are moving forward on the safe deployment of automated technologies because of the enormous promise they hold to address the overwhelming majority of crashes and save lives.”