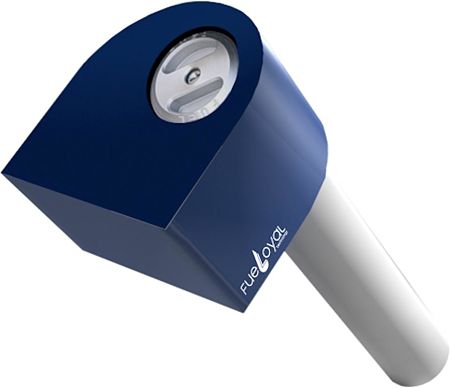 Chicago-based Fueloyal has developed a “smart fuel cap” designed to prevent thieves from siphoning fuel from the tanks and prevent drivers from stealing it at the pump.

Fuel theft in trucking is a $10 billion problem for the trucking industry and the company’s iCap 1000 is designed to protect the valuable fuel in the big rigs tanks.

“To be honest, the biggest problem is stealing by the truck drivers themselves,” said Fueloyal founder George Magoci. “Instead of putting fuel in their truck, they’ll use the company card to put it in another truck at a discount and take the cash,” he said.

Fueloyal is one of 10 startups identified in the Techstars Internet of Things accelerator, designed to recognize startups that are making a difference.

“While IoT is an exciting space with limitless opportunity, we are still early in that there is no real standardization or infrastructure that benefits everyone.” says Jenny Fielding, managing director of Techstars. “This is why we partnered with GE, Verizon, PwC, Bosch and SAP, to provide a common ground for these industries to come together and help startups innovate.”

“It may not be as sexy as the consumer side of IoT,” said Fielding. “But the opportunity is so much bigger — the global opportunity is massive and the dollar amounts are massive.”

The iCap 1000 can precisely measure the gas going into the truck’s tank while checking it against what’s coming out of the pump through a real-time, 3G-networked connection.
In addition, the $299 gadget — which requires a $39-a-month data plan — can scout out the truck stops with the cheapest fuel, automatically planning stops based on price, location and how much fuel is in the tank at any given time.

An example of the product’s efficiency is Soal Trucking, a Bloomingdale, Ill., outfit that operates about 20 rigs across the lower 48 states. Soal has cut monthly fuel costs by 2-3 percent since it installed the iCap 1000 several months ago, said Vice President of Operations Jonas Kaminskas.

Multiply those savings by the nation’s 3.6 million 18-wheelers and it points to a $10 billion problem annually, Magoci said.

“Most truckers are good people, but we had three incidents last year,” said Kaminskas.

“Other products and companies are trying to solve this problem, but they are centered around fuel tank modification which is normally not allowed due to warranty issues or they require a connection to the truck to have power or to send the data to the company which makes creates vulnerabilities and is easier to disable,” said Magoci.

Another company, Hyliion of Pittsburgh, Pennsylvania, was recently selected from a field of more than 1,100 entries for its hybrid trailer design that uses regenerative braking power to capture power – saving more than 30 percent on fuel costs and decreasing emissions by 10 percent.

“The Hyliion team is honored to be the Grand Prize winner of the prestigious Create the Future Contest,” said Thomas Healy, CEO and Founder of Hyliion. “It is a tremendous validation of the impact the Hyliion Intelligent Electric Drive Axle System will have on the trucking industry and the environment.”

The survey of roughly 100 fleet managers was funded by ExxonMobil.

Every fleet included in the survey uses diesel. The fuel tends to be a major expense for truckers — a median of 24 percent of total operating costs — as well as one of the most toxic sources of pollution.