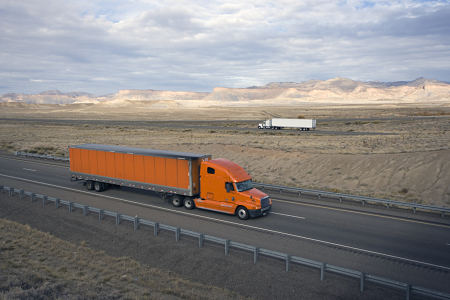 With the future of transportation clearly in self-driving technology, three new California-based autonomous truck companies are entering the mix.

Embark, Starsky Robotics and Drive.ai are new entries in the field.

Embark, which has been approved to test in Nevada, has created a technology that allows trucks to drive from exit to exit on the freeway without any human input.

Embark’s truck uses a combination of radars, cameras and depth sensors known as LiDARs to perceive the world around it. The millions of data points from these sensors are processed using a form of Artificial Intelligence known as Deep Neural Nets (or DNNs) that allow the truck to learn from its own experience—much like humans learn from practice.

“Analyzing terabyte upon terabyte of real-world data, Embark’s DNNs have learned how to see through glare, fog and darkness on their own,” said Alex Rodrigues, CEO and co-founder of Embark. “We’ve programmed them with a set of rules to help safely navigate most situations, how to safely learn from the unexpected, and how to apply that experience to new situations going forward.”

Professional truck drivers were at the forefront of the team’s minds when they first developed the technology. Embark’s truck is built specifically to handle long, simple stretches of freeway driving between cities, rather than all aspects of driving. At the city limit, Embark’s computerized truck hands off to a human driver who navigates the city streets to the destination. A human driver will still touch every load, but with Embark they’re able to move more loads per day, handing off hundreds of miles of freeway driving to their robot partners.

According to Rodrigues, the idea for Embark came after blowing a tire on the interstate and waiting four hours for the tow truck to arrive.

“Every single 18-wheeler that drove past had a sign on the back ‘Drivers Wanted’. It was so clear there was a shortage of drivers,” he said. “The numbers back that up. The American Transportation Research Institute estimates there is currently a shortage of 100,000 truck drivers in the industry, which is poised to only get worse as baby boomer drivers – the bulk of the industry’s workforce – retire over the next decade. Embark’s goal is to increase productivity per driver and prevent the shortage from becoming a crisis.”

Starsky Robotics says it has a solution to on-and off-highway deliveries by self-driving trucks, including the “last mile” issue for how a driverless vehicle will deliver cargo at its final destination.

Starsky plans to use remote drivers rather than onboard monitors.

“Our remote drivers will pilot trucks from the door of the distribution center to the highway, then remotely engage the autonomous system,” Seltz-Axmacher said. “When the truck gets close to the off-ramp, another remote driver will take control of the vehicle” to its final destination.

Seltz-Axmacher said Starsky already has begun testing its system and expects to “remove human drivers from certain vehicles by the end of the year.”

Drive.ai, the third newcomer to the space, is testing its technology in California and its engineers plan to start off with limited local deliveries to map out future autonomous routes.

While many see autonomous trucking as one of the first places where AI will majorly disrupt the workforce, displacing long-haul drivers, some experts also note that the industry is struggling to find drivers.

Drive.ai is looking not only to create the best hardware and software to enable self-driving cars, but also to make sure those cars communicate with people outside of the car in the most effective way possible.

Core to Drive.ai’s approach is using deep learning across the board in its autonomous driving system, which means they’re teaching their self-driving cars somewhat like how you’d teach a human. That involves providing a host of examples of situations, objects and scenarios and then letting the system extrapolate how the rules it learns there might apply to novel or unexpected experiences. It still means logging a huge number of driving hours to provide the system with basic information, but Carol Reiley, co-founder and president of Drive.ai, says it should also help their self-driving vehicles deal with edge cases better.

“We are using deep learning for more of an end-to-end approach. We’re using it not just for object detection, but for making decisions, and for really asking the question ‘is this safe or not given this sensor input’ on the road,’” Reiley explained. “A rule-based approach for something like a human on a bicycle will probably break if you see different scenarios or different viewpoints. We think that deep learning is the definitely the key to driving because there are so many different edge cases.”

“So much of driving is non-verbal communication, when you’re inside the car, you’ve made eye contact with other drivers and pedestrians, you wave people across, you’ve given head nods, you’ve honked at them,” Reiley said. “All these type of things are ways that a human expresses what the driver’s trying to do to communicate with other drivers on the road. So now if you take the driver out of the driver’s seat and no one’s watching the road, how do all the other people around the self-driving car now know what the car is trying to do?”