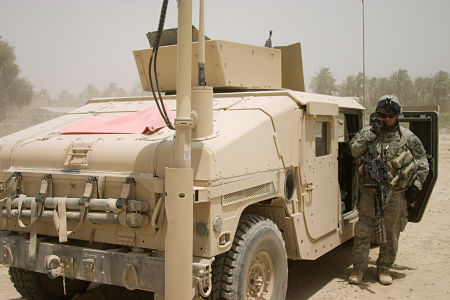 The original demonstration took place at Fort Hood Army Garrison in Texas in February of 2012. The test vehicle was a 2000 FL80 oil truck. The hydrogen injection system was tested by a local CAT Army contract mechanic.

According to Robert Kennedy, Air Program Manager, DPW Environmental Division at Fort Hood, “The mileage testing achieved a 7.2 to 8.4 miles per gallon increase in mileage. This is a 15.3 percent improvement in fuel economy.”

Commercial Hydrogen developed the On-Demand Hydrogen Injection system. The use of retrofit kits is dramatically improving mileage and maintenance costs. As an additional benefit, air emissions are significantly improved, too.

Commercial Hydrogen specializes in retrofitting commercial trucks. The retrofit or ‘bolt-on’ products are for 10-15L diesel engines. Also, the system is for trucks manufactured from 1980 to the present.

“Our products are at the leading edge within the existing billion-dollar industry. Our retrofits are paid for in less than one year, just in fuel savings alone,” said Fowler. “Operators are getting improved fuel economy in the 10-30 percent range. Additionally, we are finding that air emissions are improving dramatically. It’s a total win-win.”

Fowler said his product addresses both economic and environmental challenges facing the industry.

“The implications to the military are significant. An increase in mileage is important, not only as a cost savings, but provides increased operational range and efficiencies. Additionally, anything that can improve air quality is an extra benefit,” he added.

In a separate effort, the Army is testing a hydrogen-powered experimental mid-size pickup truck at Colorado’s Fort Carson. The hydrogen-powered ZH-2 has no pistons or cylinders, but is powered by a fuel cell that turns hydrogen into electricity.

Built by General Motors, the pickup is being given a military field test.

“One of the first things you notice is how quiet it is,” said GM’s Chris Colquitt, the lead engineer behind the truck as the ZH-2. The fuel cell has essentially no moving parts. It works like a battery that never runs flat because a constant flow of hydrogen and atmospheric oxygen keeps the juice flowing.

The Army has long coveted the technology because it brings a combination of desperately-needed fuel efficiency and near-silent operation to the battlefield.

Brian Butrico, an Army engineer overseeing the ZH-2, said the fuel cell sips fuel at less than half the rate of a Humvee. And unlike Army trucks that guzzle fuel while idling, the fuel cell shuts down.

“The feedback is positive so far,” he said.

Engineers at the Army Tank and Automotive Research and Development Center in Michigan are building a “reformer” that can produce hydrogen by refining other easily-available fuels.

The hydrogen-maker will be about the size of an Army trailer and could be hauled straight to the battlefield to fuel next-generation rigs.

One of the military’s biggest gas-guzzlers overseas is the generator. At the height of the wars in Iraq and Afghanistan, Army generators at forward bases converted 357 million gallons of diesel into electricity each year.

Trucking isn’t the only industry where hydrogen is being viewed as an alternative. Hydrogen power is being tested for application in the railroad, shipping and power industries.

Japan is investing heavily in hydrogen. With 90 percent of the country’s energy coming from fossil fuels, Japan is looking to hydrogen as a possible solution to reduce greenhouse gas emissions. Japan will start importing hydrogen from Australia in 2020.

The hydrogen truck revolution began in Norway where the country’s largest food wholesaler, ASKO, decided that hydrogen would be more practical than bulky batteries. Norway’s first hydrogen-powered trucks are slated for delivery in 2018.

“Hydrogen fuel cells are much lighter than batteries and with hydrogen fuel we can realize a better method of propulsion for all sorts of freight and passenger transport. The only residue of burning hydrogen is water – so there is no pollution,” researchers said.