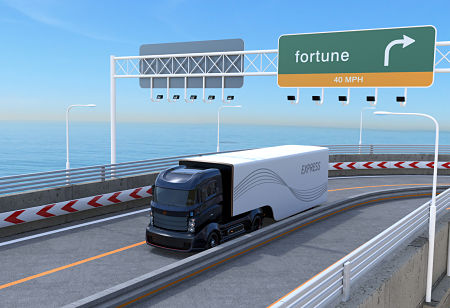 TuSimple used Nvidia technology, mixed with others, to develop its autonomous driving solution. In June, the company successfully completed a 200-mile Level Four test drive from San Diego to Yuma, Arizona, using Nvidia GPUs and cameras as the primary sensors.

TuSimple has more than over 100 employees in two R&D centers, in Beijing and San Diego.

“Nvidia is unrivaled in delivering the computing performance needed for autonomous vehicles,” said Xiaodi Hou, chief technology officer of TuSimple. “By combining Nvidia technology with our expertise in computer vision and artificial intelligence, we’re building a world-class platform that will disrupt the freight industry. We highly value our strategic partnership with Nvidia.”

The KITTI/CityScapes dataset has been a popular arena for many years. Its players include many world-class research institutes, such as Baidu, Samsung, NVidia, and NEC, and top universities, such as Stanford and the University of California.

The KITTI Vision Benchmark Suite, established by Karlsruhe Institute of Technology and Toyota Technological Institute at Chicago, is the world’s first and largest benchmark for vision-based autonomous driving.

KITTI includes real images collected from a variety of road scenes, from urban streets to country roads to highways. Each image contains a sophisticated scenario involving, for instance, a crowded vehicle and pedestrians, with various levels of occlusion.

Cityscapes Dataset is published by Mercedes-Benz and provides a segmentation data set in anonymous driving. It is used to evaluate algorithms’ performance of semantic understanding in an urban setting. Cityscapes have 50 cities with different scenes, backgrounds and seasons. It has 5,000 fine annotation images, 20,000 roughly annotation images and 30 class objects.

Nvidia’s foray into the autonomous trucking technology world continues a trend that has seen the company invest in a range of tech companies. Nvidia has invested in nine companies in four countries over the past year. New investments include the following:

Nvidia GPU Ventures is one element of the company’s extensive involvement in the AI ecosystem. Nvidia GPU sponsors an Inception program, which supports 1,750 startups from around the world, providing access to technology, strategic expertise and the company’s global marketing platform.