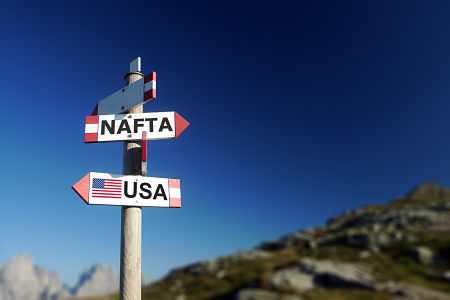 With the next round of talks on a new North American Free Trade Agreement (NAFTA) coming in September, Canada, Mexico and the United States are saying they’re committed to wrapping up the negotiations quickly with a far-reaching deal.

“While a great deal of effort and negotiation will be required in the coming months, Canada, Mexico and the United States are committed to an accelerated and comprehensive negotiation process that will upgrade our agreement and establish 21st century standards to the benefit of our citizens,” the countries said in a statement after five days of discussions in Washington.

The next round of negotiations is scheduled in Mexico, with talks moving to Canada in late September and back to the U.S. in October. Additional rounds are being planned “for the remainder of the year,” the countries said.

The joint statement reinforces the notion that the three nations are seeking a quick deal before politics overtakes the agenda next year. Mexico will hold a general election next July, while U.S. Congressional mid-terms are scheduled for November 2018.

Trade experts weren’t surprised by the cautious sense of optimism in the joint statement.

“Despite good intentions, this NAFTA renegotiation may be more akin to a lengthy process of couples therapy than a quick exercise in speed dating,” said Chad Bown, a senior fellow at the Washington-based Peterson Institute of International Economics.

“The scope and volume of proposals during the first round of the negotiation reflects a commitment from all three countries to an ambitious outcome and reaffirms the importance of updating the rules governing the world’s largest free trade area,” according to the statement.

Trucking and logistics interests are keeping a close eye on talks to revamp NAFTA – particularly those involved in the automotive industry.

Shannon Newton, president of the Arkansas Trucking Association, told the Northwest Arkansas Democrat Gazette that people throughout the industry are concerned that rapid changes could ripple through supply chains before anybody has time to adapt.

“The industry has anxiety over change, and it’s not necessarily that the way we are doing it is the best way,” Newton said.

According to U.S. officials, they want to “negotiate a fair deal” and “fix America’s persistent trade imbalances.”

“We feel that NAFTA has fundamentally failed many, many Americans and needs major improvement,” said U.S. Trade Representative Robert Lighthizer.

Most business groups strongly support NAFTA and are wary of the upcoming negotiations. The U.S. Chamber of Commerce said the overriding goal of the negotiations should be to “first, do no harm” to the economy.

“Interrupting the $1.3 trillion in annual trade across our borders or reverting to the high tariffs and other trade barriers that preceded the NAFTA could put at risk many of the 14 million U.S. jobs that depend on trade with Canada and Mexico,” said the chamber, which represents 3 million businesses.