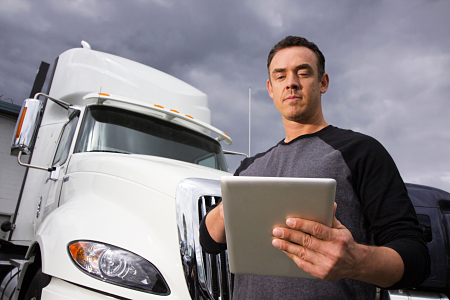 In mid-December, the Federal Motor Carrier Administration’s (FMCSA) long-awaited new Electronic Logging Device (ELD) regulations went into effect, requiring commercial drivers to equip their vehicles with electronic logs in place of the paper time cards they had used for decades.

The rule is designed to ensure that drivers take required rest breaks to enhance highway safety. FMCSA rules limit drivers to no more than 11 hours a day within a 14-hour workday. Drivers must then be off duty for 10 consecutive hours.

FMCSA was prepared for the new regulation, which went into effect Dec. 18. The ELD rule, congressionally mandated as a part of MAP-21, is intended to help create a safer work environment for drivers, and make it easier and faster to accurately track, manage, and share records of duty status (RODS) data. An ELD synchronizes with a vehicle engine to automatically record driving time, for easier, more accurate hours of service (HOS) recording.

FMCSA recently announced it would give drivers hauling livestock and other agricultural commodities a brief reprieve from compliance with the ELD mandate. The U.S. DOT has given such haulers until March 18, 2018, to switch from paper logs to ELDs.

FMCSA says the delay for ag and livestock haulers will also give the agency time to consider other ELD-related exemptions requested by drivers who work in the ag industry, the agency says.

The waiver does not change the hours of service regulations that livestock and ag haulers operate under. Drivers covered by the waiver include those hauling “any agricultural commodity, non-processed food, feed, fiber, or livestock.” Livestock is defined as “…cattle, elk, reindeer, bison, horses, deer, sheep, goats, swine, poultry (including egg-producing poultry), fish used for food and other animals designated…that are part of a foundation herd or offspring.” The waivers apply to all drivers hauling the loads, regardless of their distance traveled or whether they cross state lines.

The agency’s decision to grant the compliance extension stems from multiple requests from trade groups representing the ag and livestock business, who said the ELD mandate “exposed incompatibilities between the HOS rules and the ag hauling industry.” The National Pork Producers Council, for instance, said the strict adherence to hours of service rules prompted by the ELD mandate would “endanger the health and welfare of animals transported.”

“FMCSA has listened to important feedback from many stakeholder groups, including agriculture, and will continue to take steps to ease the transition to the full implementation of the ELD rule,” said FMCSA Deputy Administrator Cathy F. Gautreaux.

Other exceptions to the ELD rule include the following:

Not that there hasn’t been snags since the rule was implemented. During the first week of mandatory use of the devices, some truckers reported delays in having devices delivered, difficulty in getting units installed, and trouble logging in to smartphone apps that sync up with the devices, according to the Wall Street Journal.

Other drivers reported waiting for hours on hold trying to reach customer-service representatives.

Norita Taylor, a spokeswoman for the Owner-Operator Independent Drivers Association (OOIDA), an industry group that has opposed the mandate, said her organization has received a lot of negative feedback regarding ELDs and the providing companies.

“In one day we had 50 calls complaining about problems of some sort dealing with ELDs,” she told WSJ. “We think the providers are not prepared to deal with owner-operators or small businesses. They are used to servicing large fleets.”

Another concern with ELDs is the threat of hacking from terrorists or other parties.

Sam Lauzon, a senior engineer in research at the University of Michigan Transportation Research Institute’s Cybersecurity Department, said the threat should be considered but cautioned about over reacting.

“The odds of you being harmed on the road by a drunk driver, someone not driving for the road conditions, someone using a cellphone, or even mechanical failure are about a million times more likely than ELD manipulation,” Lauzon told the Detroit Free Press.

He said a cybercriminal would need the skills to hack into a mobile network, know which brand of ELD was in the truck, and overwrite its “firmware,” the software programmed into its read-only memory.

“Even then — that’s one ELD they compromised,” Lauzon wrote. “Who’s to say they’ll have success with any other ELD, other than the one in their physical possession?”