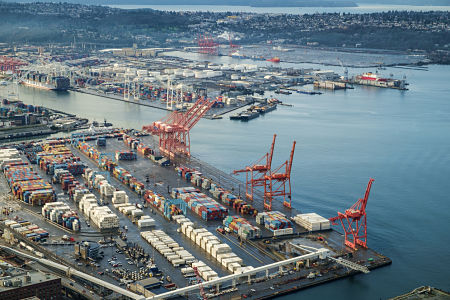 Threatening a work stoppage, truckers serving the ports of Seattle and Tacoma were successful in getting a second extension from the Northwest Seaport Alliance (NWSA) to bring their pre-2007 trucks into clean air regulation compliance.

Originally, the truckers faced a January 1, 2018 deadline, which was shifted to April 1. In February, NWSA leadership agreed to extend the deadline to Dec. 31, 2018.

“No one suggests that the state allow the drivers to operate with faulty brakes or without lights because they face economic challenges,” said Kenworthy. “That’s because health and safety are at stake. Well, they’re at stake here as well. Air pollution causes lost work days, sick days out of school for children and kills approximately 1,000 Washingtonians every year.”

“We did not take this decision lightly. We based our decision on extensive community feedback and our public service responsibility to carefully manage economic hardship, while also improving air quality and maintaining port efficiency.”

NWSA also announced they were working with a non-profit lender to create a $5-6 million loan fund to assist truckers having to upgrade their equipment. The loan fund will require approval by the Washington State Legislature.

“Whatever date we set, we have to live by,” Felleman said. “Any further sliding of the deadline is bad for everybody. We need predictability and we also need adequate lead time for people to make decisions on their life and future.”

The issue has been brewing for a decade.

In 2008, the ports of Tacoma, Seattle and Vancouver, B.C., adopted the Northwest Ports Clean Air Strategy, with a goal to have 100 percent of the drayage trucks serving container terminals with cleaner diesel technology – a 2007 engine with diesel particulate filter or equivalent by Jan. 1, 2018.

To help reach the goal, the ports of Seattle and Tacoma invested more than $15 million in matching grant funds to spur truck conversion and invest in gate infrastructure. More than 410 trucks were scrapped and replaced with new trucks through partnership with the Puget Sound Clean Air Agency and funding through DERA, CMAQ and Department of Ecology grants.

Despite these efforts, at the end of 2017, only 53 percent of the roughly 4,500 trucks serving NWSA terminals met the 2007 engine or newer standard.

According to NWSA, this is how the Clean Truck program will roll out in 2019.

Seattle: Trucks entering Seattle container terminals will be required to have a valid RFID tag. RFID tags will only work for trucks with a 2007 or newer engine. RFID tags for trucks not meeting the 2007 engine or newer standard will be turned away unless the driver has an approved pass.

Tacoma: Trucks entering Tacoma container terminals will be required to have a green Clean Truck Program sticker. Trucks with existing yellow stickers will be turned away unless they have an approved pass.

Beginning Fall 2018, all trucks entering NWSA international container terminals in both Seattle and Tacoma will require a valid RFID tag – clean truck stickers will no longer be used.

In order to take advantage of the extension, truckers will be required to register with NWSA to receive a pass that allows access to the international container terminals until owners receive compliant trucks—no later than Dec. 31, 2018.

To receive this pass, truck owners must demonstrate they are in the process of complying with the standard through the purchase of a compliant truck or the installation of a retrofit to lower their truck’s emissions to an equivalent level. The application for this pass will be available by March 1 on the NWSA website at www.nwseaportalliance.com/trucks.

While the truckers and NWSA work to come into compliance, Washington’s legislature is weighing in on the issue.

A bill introduced in the Washington State House seeks to require all trucks doing business at port terminals in Seattle, Tacoma and Vancouver to be powered by 2007 or newer model engines.

Rep. Jake Fey, D-Tacoma, the primary sponsor of HB 2601, said he is finished waiting for the ports to sort out the issue. Fey said he is particularly frustrated with the Tacoma port, which is in his district, for failing to install technology at the gates to screen for compliant trucks. The Port of Seattle has a system ready to go.

“This is as much of a message bill as anything else,” Fey said. “They need to be paying attention to the public’s concerns.”

Fey added that while upgrading their trucks will be difficult for some drivers, reducing pollution is the priority for the health of the ports’ neighbors as well as the ability of the Seaport Alliance to compete with other large West Coast ports.