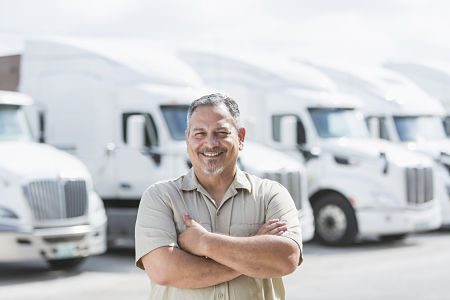 Truck driver pay is on the rise as an increasing demand for freight services and stiff competition for drivers has intensified, according to a study conducted by the American Trucking Associations (ATA).

“This latest survey, which includes data from more than 100,000 drivers, shows that fleets are reacting to an increasingly tight market for drivers by boosting pay, improving benefit packages and offering other enticements to recruit and retain safe and experienced drivers,” said ATA Chief Economist Bob Costello.

“Our survey told us that carriers are offering thousands of dollars in bonuses to attract new drivers,” Costello said. “And once drivers are in the door, fleets are offering benefits like paid leave, health insurance and 401(k)s to keep them.

“This data demonstrates that fleets are reacting to concerns about the driver shortage by raising pay and working to make the job more attractive,” he said. “I expect that trend to continue as demand for trucking services increases as our economy grows.”

According to the Wall Street Journal, trucking companies from big operators like Green Bay, Wis.-based Schneider National Inc.to regional carriers like Birmingham, Ala.-based Montgomery Transport have added anywhere from one to several cents per mile to their driver compensation this year. Chattanooga, Tenn.-based U.S. Xpress Enterprises Inc. last month said it would offer bonuses that could bring drivers an extra $50,000, based on incentives.

FFE raise driver pay across-the-board on April 2 with both hourly rates and per-mile rates for regional and over-the-road drivers going up, based on experience and location.

One possible solution to the driver shortage issue is expanding the driver role to 18-21-year-olds, now prohibited from driving across state lines.

“Unfortunately, we see many young Americans faced with the choice of either taking on thousands of dollars in college debt or entering into a job market with grim prospects for untrained workers,” said Rep. Hunter.

“My legislation addresses this issue in the trucking industry by allowing qualified drivers under the age of 21 to enter into an intensive vehicle operation and mentor-apprentice training program, allowing them to cross state lines moving freight across the country. This is a common-sense approach that creates job opportunities for younger workers and provides a vital resource to America’s trucking industry that is critical in supporting our growing domestic economy.”

While most states allow for issuing commercial driver’s licenses at the age of 18, federal law restricts drivers under the age of 21 from crossing state lines. The DRIVE-Safe Act would remove this regulation for individuals who complete a program consisting of two, sequential probationary periods where an apprentice must complete at least 400 hours of on-duty time with at least 240 hours driving while accompanied by a qualified mentor driving professional.

Rep. Hunter’s legislation has received significant support from the industry, including UPS, the ATA, the International Foodservice Distributors Association (IFDA) and the National Council of Chain Restaurants, a division of the National Retail Federation.

“This legislation paves the way for new drivers to sustain a safe and efficient supply chain for the more than one million restaurants and foodservice outlets in the US,” said Mark Allen, president and CEO of IFDA. “This bill creates opportunity while reinforcing a culture of safety far and above current standards to provide the next generation of drivers with the critical skills they need to operate a truck in the 21st century.”

“This is a common-sense proposal that will open enormous opportunities for the 18-21-year-old population, giving them access to a high-paying profession free of the debt burden comes with a four-year degree,” said ATA President and CEO Chris Spear. “Moreover, this bill would strengthen training programs beyond current requirements to ensure safety and that drivers are best prepared.”