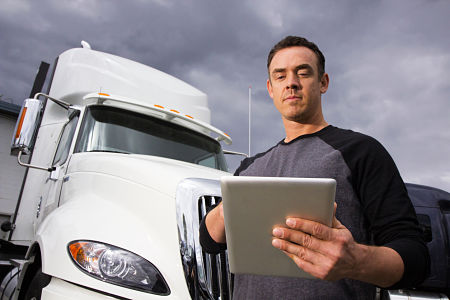 A late-March survey by CarrierLists found that the trucking industry was 91 percent compliant with federal Electronic Logging Device (ELD) requirements a week before the April 1 implementation deadline.

Drivers stopped without an ELD in the vehicle will face being put out of service for 10 hours.

Joe DeLorenzo, director of the Office of Enforcement and Compliance at FMCSA, addressed the issue at the recent Mid-America Trucking Show in Louisville.

“It amazes me how many times people don’t understand how the rule works,” he said, quickly adding, “but it was written by Congress, so it can be confusing.”

DeLorenzo tried to clear up general questions on the ELD regulations, including the 150 air-mile agricultural exemption.

“Once you exit that 150 air-mile radius, that’s when you have to use the ELD and your 11 hours start,” he said. DeLorenzo said that if an ag hauler is taking a load of cows, the first 150 air miles (approximately 172 actual miles) do not count against hours of service limits. Once the driver goes to mile 151, he must start recording his driving time on the ELD.

FMCSA is considering whether that 150 air-mile exemption should also be included on the back end – meaning a driver could take 150 miles before 11 hours and 150 after 11 hours and still be compliant. He said this issue has yet to be resolved.

Currently, there is a 90-day waiver from the ELD rule for ag haulers that expires on June 18, 2018. DeLorenzo advised any driver using that exemption to carry a copy of the waiver in the vehicle.

In general, any driver that must currently fill out a Record of Duty Status (RODS) will need an ELD with a few exceptions, namely those who do not need to fill out a RODS more than eight times in any 30-day period; those who are in drive away-tow away operations where the product being delivered is the vehicle being driven; and those using engines made before model year 2000.

Some in the industry believe the new regulations will push some drivers out of the business.

“The overall impact, I think, is going to reduce the drivers throughout North America,” Maine Pointe’s Bob Gernon told Supply Chain Dive. “I think there’s going to be a terrific amount of competition for that particular demographic (truck drivers) as infrastructure and overall construction picks up.”

One industry making loud protests against the ELD requirements is the food industry, which voiced its concerns at the February meeting of the United Fresh Supply Chain Logistics Council in Washington, D.C.

Dante Galeazzi, president and chief executive officer of the Texas International Produce Association, told regulators and members of Congress that the regulations are raising costs for small businesses.

Galeazzi quoted a Reuters article. “The drive for cost cuts and higher margins at U.S. trucking and railroad operators is pinching their biggest customers, forcing the likes of General Mills Inc. and Hormel Foods Corp. to spend more on deliveries and consider raising their own prices to pass along the costs.”

“It’s not only produce, but meat, processed and frozen foods are going up on costs. That’s exactly what we’ve been saying. It is very important. ELDs are one of the big factors leading to a driver shortage,” he said.

Leonardo Tarriba, chief executive officer of Farmer’s Best, said transportation costs around the beginning of 2018 “were the worst we’ve ever seen. Me and my coworkers, who’ve been here 25 years or more, have never seen that shortage of drivers and trailers. Plus, trucks are always short at the holidays.”

Tarriba said the ELD law “created a lot of panic” and led to trucking increases as high as 100 percent. “The demand was there. Consumers were asking for our products, but we didn’t have wheels.”

“Eventually consumers will have to pay more,” Tarriba said. “Now there are negotiations between buyers and sellers.”

Evans said most of the survey reports are from companies that run six or more fleets. Evans said there are at least half a million Class 8 vehicles without an ELD device on them and that the majority of the 16 million Class 3 to Class 7 vehicles are not compliant either. “We have data on how many devices we think have been manufactured and it is not anywhere near enough to support the whole industry,” he said.