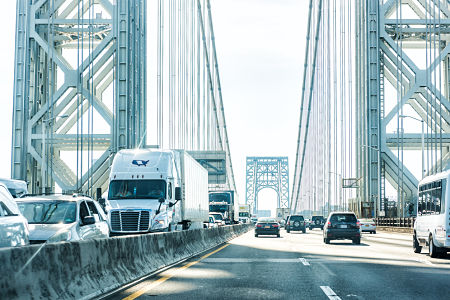 Traffic congestion that delays trucking traffic now costs the industry $74.5 billion in lost productivity every year, according to a report by the American Transportation Research Institute (ATRI).

“Perhaps no other issue has as great an impact on this nation’s supply chain as traffic congestion. In the face of growing and pervasive congestion, not only does the trucking industry lose billions annually but ultimately the consumer pays the price through higher prices on the shelf,” said Benjamin J. McLean, CEO of Ruan Transportation Management Systems. “Doing nothing to address the state of our nation’s infrastructure will create a significant impediment to the growth of our economy.”

In this latest Cost of Congestion analysis, ATRI utilized a variety of data sources including its unique truck GPS database to calculate delay on the National Highway System (NHS) totaling nearly 1.2 billion hours of lost productivity. This equates to 425,533 commercial truck drivers sitting idle for a working year.

ATRI’s analysis also documented the states, metropolitan areas, and counties that were most impacted by these delays and subsequent cost increases. The top 10 states experienced costs of more than $2.4 billion each, led by Texas and Florida with more than $5.5 billion each. In fact, the top 10 states combined account for 51.8 percent of the congestion costs nationwide.

As part of this analysis, ATRI has updated its congestion cost database with 2016 data to provide granular cost information to transportation planning officials on the hours of delay and associated cost by major jurisdiction type and road level.

She added that ATRI studies have shown the fuel tax “is clearly” the most efficient means of delivering revenue to the transportation system — but that approach faces an uphill climb in the current Congress, whose majority is leery of levying more taxes.

One trucking executive offered a different definition of a fuel tax. “The fuel tax is not a tax. It is an investment. It has worked relatively efficiently, but it needs to be changed,” said Tonn Ostergard, chairman and CEO of Crete Carrier Corp., a truckload carrier based in Lincoln, Neb.

“The changing supply chain has added to a lot of congestion in major metropolitan areas,” he said.

ATA leaders support a plan that would provide the trust fund with an additional 20 cents per gallon from sales of gasoline, diesel and natural gas fuel. That increase, under the Build America Fund, would be applied at the wholesale terminal rack, before the fuel reaches the retail gas pump, and would be indexed to inflation and improvements in fuel efficiency, according to ATA.

The Build America Fund would bring in $340 billion during the first decade with an average annual cost on a passenger vehicle of $100, a box truck of $350 and on a Class 8 tractor of about $2,100, he said.

With the money coming in to fund infrastructure now, 90 cents of every dollar go to pay for existing infrastructure, a system that is 65 years old, and 10 cents goes toward new capacity, he said.

The federal government created the trust fund in 1956, and motor fuel taxes have increased four times since: in 1959, 1982, 1990 and 1993 — but the trend of improved fuel mileage and alternate sources of vehicle power has sharply lowered its annual revenue.