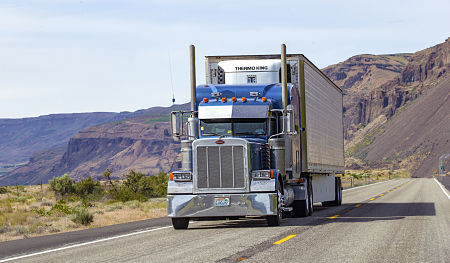 U.S. Transportation Secretary Elaine Chao says the truck driver shortage in the United States is a real and growing problem for the country.

Chao said the administration is working on pilot programs to potentially solve the problem, including a lower minimum age for drivers and more military transition drivers.

An Indianapolis startup, DriverReach, is not waiting for federal solution.

The company’s app helps trucking companies conquer the shortage in commercial drivers by taking the job application process digital and providing employers with a dashboard that helps organize the recruitment process.

Founder and CEO Jeremy Reymer says many companies are using outdated systems to recruit drivers. With DriverReach, the hiring process is sped up by nearly 30 percent thanks to digital job applications that can be completed via smartphone and automated verification of previous employment, he says. The app has a job application and driver contracting system, as well as customer relationship management capabilities.

Reymer previously owned Driving Ambition, which he sold to TransForce last year. He wanted to build a proprietary transportation technology next, which became DriverReach.

Despite a booming economy, which should be good news for logistics companies, their success comes “at the mercy of finding talent,” Reymer says. The average age of commercial truckers is 55, with thousands retiring each year and no stream of replacements in sight.

“There’s an image issue the industry is trying to address. It’s not an easy job—it’s highly regulated, from drugs and alcohol to hours per day you can work.”

In the trucking business, job applicants don’t simply forward a resume to a hiring company, Reymer explains. They must complete a Department of Transportation application, and provide details of employment from the previous decade, which in turn must be verified by the potential employer. Then, they must pass background checks and drug tests.

Once a job applicant has submitted his or her information, DriverReach sends automated emails to incentivize hiring companies to respond. “It’s easy for them—it introduces them to the system, which puts driver background information into a secure database, so applicants can point future employers there,” he says.

The DriverReach app is free for job applicants, while employers pay a monthly subscription fee to access the software. Reymer says his 16-person company experienced 20 percent month-over-month growth between January and August of this year and has about 100 customers, including Consolidated Logistics Services, a temp agency for truck drivers. So far, he has self-funded much of DriverReach’s growth, investing $3 million of his own money to launch it.

Last year, Reymer says he joined the American Trucking Association’s workforce development committee, where he is one of 15 members.

“I’m passionate about trucking and talent—I’ve been complaining about the issue since I’ve been in the industry,” he adds. “My focus is on how we can help hire drivers faster with more efficiency while embracing progress and helping to move the industry forward.”

Reymer says his experience in the industry gives him a keen insight into the current situation.

“We’ve been in your shoes, which is why we knew there had to be a better way—not only to attract new drivers, but to empower recruiters with modern technology to simplify their jobs and create a better experience for everyone involved in the process—from the driver applicant to the recruiter to the executive team.

“DriverReach is dedicated to raising the driver recruiting standard through our purpose-built platform supported by our team of experts with over 60 combined years of industry experience,” he said.

Bob Costello, chief economist of the American Trucking Associations (ATA), foresees a grim future for the supply of truckload drivers in the U.S. over the next eight years.

Costello reviewed trends in the universe of future truck drivers and predicted the shortage of drivers will grow to 175,000 by 2026.

Costello got to his 175,000 number by taking current shortages, projected demand, and the fact that the industry is going to need to mint 900,000 drivers over the next 10 years just to replace drivers leaving the industry, mostly through retirements.

With a shortage of 175,000 drivers, “the industry is in for a lot of hurt,” Costello said. Given the key role of trucking to commerce, “so is the economy.”