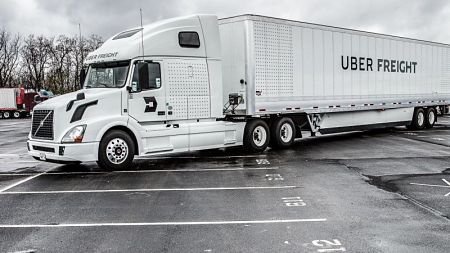 It was inevitable. Someone would develop an app that allows truckers to rate retailers that hire them and the warehouses where they deliver. That someone is Uber Freight, the trucking division of the popular ride-sharing app.

Launched in late 2016, Uber Freight matches shippers and truckers through an online marketplace. Typically, truckers must work through freight brokers, who take a 15-20 percent commission for the shipment.

Recently, Uber Freight announced that truck drivers using its app can rate the retailers and warehouses they work with. The service has already amassed more than 10,000 unique facility reviews from truck drivers during a two-month pilot period.

Xinfeng Le, the Uber Freight carrier product lead, told Business Insider that truckers are most keen on rating shippers based on their ability to load and unload quickly, as well as their availability of parking, food options, bathrooms, and so on.

“This ties back to what drivers actually care about,” said Le. “When they’re at a facility, they want to be treated with respect.”

Allowing truckers to rate facilities will promote “transparent and collaborative environment” in transportation, Le added. Truck drivers will be able to point out which retailers are holding up drivers, and then those retailers can address issues to ensure the people who move their goods are being treated respectfully.

“Driver detention is an urgent issue that must be addressed by our industry. It’s a matter of fairness,” said Don Thornton, a senior vice president at DAT Solutions. “Many shippers and receivers are lax about their dock operations, but it’s the carriers and drivers who are forced to pay for that inefficiency.”

Shippers will soon be able to view truck drivers’ ratings. Anheuser-Busch, Land O’Lakes, Niagara Bottling, Colgate-Palmolive, and other retailers are all active users of Uber Freight.

Uber Freight is one of many startups in the trucking community that’s working to eliminate the middleman in freight brokerage — such as Transfix, Convoy, and Next Trucking. The founders of those companies believe automated freight brokerage can benefit truckers.

Creating better working conditions for the 1.8 million men and women who haul freight for a living could help the industry deal with a national driver shortage that shows no sign of abating.

The van-load-to-truck ratio peaked last year, according to DAT Solutions. In June 2018, there were 9.9 loads for every available truck. That ratio was 5.6 loads-to-truck in June 2017 and 2.9 the previous June.

Transfix CEO Drew McElroy said shortage of capacity is forcing companies to drastically reconsider how they treat their drivers. If retailers don’t change their behavior, McElroy said no one would be around to move their goods.

“There are places that trucking companies will not pick up from — I don’t care if you pay me twice what the guy across the street is paying me, I’m just not going there,” said McElroy. In October, 80 percent of truckers said there are shippers they specifically refuse to work with.

“And if you’re in the business of selling widgets and if you can’t psychically move your widgets, you’re dead,” he added.

Uber Freight says it aims to deliver where it matters most: payments. When trucking companies get paid, they typically must wait 30 days or longer, enough time to sink a small business. Uber Freight is committed to paying within a few days, fee-free, for every single load. When things don’t go as planned or drivers must wait longer than expected, they pay for that too. Uber Freight classifies those fees as “accessorial” rates.

“We fundamentally believe that by focusing on drivers’ pain points we can solve the industry’s biggest challenges. Happy drivers mean happy shippers, and ultimately everyone benefits, including the end consumers of the goods. We’ve built a team of industry experts, leading technologists, and, of course, truck drivers to help us push the industry forward and level the playing field for trucking companies,” according to a company statement.

Truckers are often expected to spend hours at warehouses waiting for their shipments to load or unload. Warehouses often do not have their shipments ready for truckers, even when they’re on time, and that results in truck drivers being “detained.”

Those shippers, which might include small businesses and major retailers, should load or unload in a two-hour window in accordance with industry standards. After that, shippers are expected pay an hourly rate for every hour that a truck driver is detained at a warehouse.

Except they usually don’t. According to a survey administered by the freight marketplace DAT Solutions, only three percent of drivers from 257 trucking companies reported receiving detention pay for at least 90 percent of their claims to the shippers.