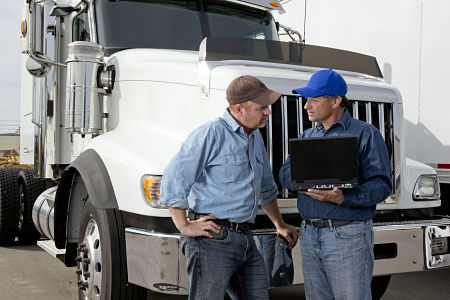 The Hours-of-Service (HOS) rules held on to the second spot in the survey for a second consecutive year, reflecting the industry’s call for additional flexibility in the rules, particularly the sleeper berth provision.

Two new issues appeared on this year’s list for the first time ever, ones that also impact the industry’s ability to recruit and retain qualified drivers; Driver Compensation and Detention / Delay at Customer Facilities.

Driver Compensation ranked third overall and represents two sides to a complex issue; motor carriers who have raised driver pay significantly over the past year in response to the driver shortage and drivers who are concerned that their pay has not kept pace with inflation.

The lack of available truck parking rounds out the top five issues on this year’s list but ranks third among commercial driver respondents after compensation and HOS rules.

The complete results of the annual survey, which generated more than 2,000 responses from motor carriers and commercial drivers, were released at the 2019 American Trucking Associations’ Management Conference and Exhibition in San Diego, California.

“While 2018 was an incredible year for trucking, we’ve seen some challenges in 2019 and certainly finding and retaining qualified drivers remains at the top of the list for our industry, said Barry Pottle, outgoing ATA Chairman and president and CEO of Pottle’s Transportation. “ATRI’s analysis reveals the interconnectedness of these top issues and provides a roadmap for how motor carriers and professional drivers believe we should move forward as an industry.”

ATRI is the trucking industry’s 501c3 not-for-profit research organization. It is engaged in critical research relating to freight transportation’s essential role in maintaining a safe, secure and efficient transportation system.

On Sept. 19, the Federal Motor Carrier Safety Administration (FMSCA) extended the comment period for a proposed rule the agency claims would add flexibility to HOS regulations for commercial truck drivers. The extension was requested by several groups, including the International Brotherhood of Teamsters and ATA.

Highlights of the proposal include:

Other safety-related issues identified by the respondents are a lack of available truck parking in safe locations (No. 5); and FMCSA’s Compliance, Safety, Accountability program (No. 8) – a data-driven safety compliance and enforcement program.

The survey also identified emerging issues in the industry, with driver distraction and driver training standards ranking 11th and 12th, respectively. According to data from the National Highway Traffic Safety Administration, more than 3,100 deaths were caused by distracted driving in 2017.

FMCSA, according to ATRI, has not fully implemented its Entry Level Driving Training Rule, which would enhance safety by including minimum standards for driver training schools, along with qualifications for new instructors.

Spear urges industry to work together

At the San Diego conference, American Trucking Associations President and CEO Chris Spear urged attendees to work together to continue shaping a strong, positive future for the industry.

“As an association that puts its members, industry and country first, we must always adhere to the value of working with anyone willing to work with us. Since becoming your president and CEO, ATA’s focus on your priorities has been relentless, posting key wins… from federal tax reform to the preemption of California’s duplicative meal and rest break requirements,” said Spear. “These results contribute to a growth environment.”

On the driver shortage, Spear said ignoring or denying the existence of the shortage is not an option, and there are several potential solutions including allowing younger drivers to obtain a commercial license with improved oversight and safety training, working to improve access to affordable health care and wellness programs that keep employees healthy and recruiting drivers from underrepresented and nontraditional demographics.