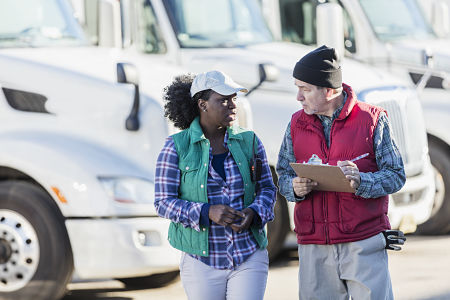 After suffering through a less than optimal 2019, the trucking industry is seeing a carryover with a sluggish start to 2020, according to industry analysts.

Adding to the slowdown is the Coronavirus (COVID-19), which has crippled the freight and logistics industry under the weight of an economic shutdown in China.

Landstar Systems reported in January that it expects the downturn to continue until the end of the year.

Landstar CEO Jim Gattoni told Fox News Business that trucking is in a “sluggish environment” and pointed to manufacturing delays and rising insurance costs as two factors putting the pressure on smaller companies.

New truck orders, a good barometer of industry health, are not promising. There were 14,100 units ordered in February, the lowest February numbers in more than a decade. The February orders represent a 20 percent drop from January and an 18 percent reduction in year-over-year orders, according to FTR, the industry’s source for transportation intelligence.

“This is not good news for the trucking industry or the economy,” said Don Ake, FTR vice president of commercial vehicles. “It appears fleets have decided to delay some orders until the health crisis (COVID-19) has passed.”

Ake told CCJ.com that most carriers have enough capacity to handle current freight volumes and do not need to order new trucks. He thinks many fleet owners are taking a tentative posture.

“The market was already in a wait-and-see mode before the virus spread,” he said. “Now, fleets are just waiting for things to calm down before returning to normal ordering patterns. The industry was already taking a pause after two years of great sales. The current uncertainty has just made more fleets leery of taking on additional risks.”

In Washington state, the industry is already feeling the impact. Sheri Call, executive vice president of the Washington Trucking Association, said the Port of Seattle is already down by about 50 sailings.

“That’s the kind of decline we’d normally see over the course of an entire year,” she told truckinginfo.com.

She said warehouses at the Port of Seattle are full due to companies ordering goods to get ahead of China tariffs.

“However, because our sailings are down, our trucking members are struggling right now, because there is less freight coming in or out of the port. So, they report they are reducing capacity and laying off independent owner-operators at the rate of about one per day to deal with changing circumstances. So, we are already seeing some impact from the Coronavirus. But it’s too soon for us to accurately gauge how severe this outbreak will eventually be.”

The Harbor Trucking Association in Long Beach is suffering the same fate.

“More than 50 blank sailings have caused marine terminal operators to reduce the amount of shifts they are open. Coupled with appointments and restrictions for empty returns, motor carriers are unable to return empty containers and their yards are overflowing,” said Weston LaBar, the association’s CEO.

The affects are not limited to the West Coast. The Port of Baltimore reduced operating hours at its container terminal because of declines in incoming international cargo, according to a report in the Baltimore Sun.