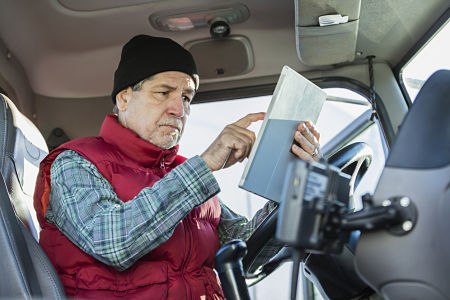 Truck drivers and brokers have lined up on opposite sides when it comes to the Federal Motor Carrier Safety Administration’s (FMCSA) proposed broker transparency rule.

The issue at hand is that brokers are now required to provide carriers with an electronic copy of every transaction within 48 hours. Drivers can now request that information but usually do not, fearing retribution from the carriers.

OOIDA’s petition requested that information automatically be sent to all parties, including the drivers. SBTC’s request to FMCSA was to stop brokers from engaging in what it calls coercion against drivers to discourage them from making those requests.

OOIDA asked that in addition to the automatic transmission of information, FMCSA “explicitly prohibit brokers from including any provision in contracts that requires a carrier to waive their rights to access the transaction records.”

“OOIDA has long pushed for greater transparency in transactions with brokers, but COVID-19 has made this an even more pressing matter. With rates on the decline, many of our members are concerned they are the only ones feeling the pain – or at least feeling a disproportionate amount of the pain,” OOIDA wrote in a letter to Congress in May. “This will not change until Congress addresses the widespread evasion of 49 CFR 371.3. Therefore, when developing the next COVID-19 relief bill, Congress must include measures to prevent brokers from continuing to circumvent existing federal transparency requirements.

“Brokers charge rates to customers to move their loads,” driver Harpreet Aulakh wrote in his comments. “But they don’t give us that money, they are supposed to charge us 5-10 percent or whatever the rate we agree, and we should get our money straight. But instead, they hide everything and put all that money in their pockets.”

Linda Allen, an independent operator from Florida, said most of her dealings are with one broker. She wrote that her arrangement calls for her to receive 80 percent of her line haul. “But without transparency I am dependent on the broker informing me of what that 80 percent is. If I ask to see the actual paperwork, I am told it is a matter of confidentiality.

“I want FMCSA to prohibit brokers from requiring waivers in exchange for loads,” Allen added. “If the regulations were enforced and electronic copies mandated, brokers would be less likely to cheat drivers of their earned income.”

Comments from brokers argued the other side of the issue.

Dan Nester said the volatility of the market means rates can change on the spur of the moment.

“There are other times during a given year where the roles are reversed. The carrier is able to name their price for hauling a shipment. Even though their fixed costs haven’t changed, they are able to take advantage of the arbitrage between supply and demand,” he said.

“And when that happens, the broker sometimes needs to ‘eat the loss.’ It seems the owner-operators want to have it both ways. They want to see what brokers make on shipments when the market is soft but do not want anyone to know what their own margins are when the market heats up.”

Karla O’Malley argued that the carriers do not have a right to see the numbers.

“While allowing carriers to see the pricing brokers receive on loads sounds reasonable, is it really? Do we get to see what retailers pay for their products?” she writes. “The carrier has the final say on what they will haul a load for. The dollar amount the broker receives for their services and dealings with the shipper is frankly none of the carrier’s business. The carrier can source and find their own shippers if they so choose.”

At press time, FMCSA had received more than 1,000 comments on the proposed rule.

Link to the federal register is below: