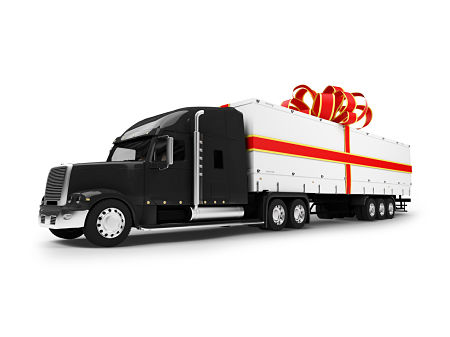 In advance of the upcoming holiday season, retail warehouses are filling up and that may bode well for the trucking industry.

Dale Rogers, a business professor at the W.P. Carey School of Business at Arizona State University, told Transport Topics that, “it’s incredible how all of the indicators are going up. I think people are betting this will be a big Christmas. So, businesses are positioning inventory, warehouses are full, warehouse prices are going up, transportation prices are going up,” he said.

Rogers is one of the authors of October’s Logistics Manager’s Index Report (LMI), which showed a 20-point rise from six months ago.

The LMI report said transportation prices have jumped by 30.5 percent since March as trucking industry capacity has tightened.

“Transportation prices are increasing at a significant rate and are likely to continue to do so as we near the Q4 retail season — particularly with e-commerce projected to increase by 50 percent year-over-year,” the report said.

American Trucking Associations (ATA) Chief Economist Bob Costello said he is generally optimistic about the state of the trucking’s economy. Still, he is less sure about the overall condition of the U.S. economy.

“Trucking continues for the most part — not exclusively, but for the most part — on the good side of the economy, because goods are doing better than services,” Costello said, pointing out that retail giants such as Walmart and Amazon.com Inc. are reporting record business while service industry stalwarts such as restaurants and hotels are slumping.

The latest jobs report from the Labor Department showed the nation’s unemployment rate fell to a better-than-expected 6.9 percent, and the number of unemployed decreased by 1.5 million to 11.1 million.

The report said transportation employment increased by 63,000 in October.

In warehousing and storage, 28,000 jobs were added. Transit and ground passenger transportation added 25,000, and trucking added 10,000.

Rajeev Dhawan, director of the Economic Forecasting Center at Georgia State University, said that while the unemployment numbers were better than most economists had forecast, the U.S. economy is not in the clear yet.

He said the multitrillion-dollar federal Paycheck Protection Program and other stimulus initiatives saved the economy in the third quarter when gross domestic product shot up a record 33.1 percent. But that increase was only slightly higher than the second-quarter GDP drop of 31.4.

“The shot in the arm for the spending that happened in April and May that jump-started the economy with the stimulus checks and extended unemployment benefits, that money is over now,” Dhawan said. “Now, the economy’s growth depends on the COVID-19 virus, and how it progresses and what activities can remain open, and it’s not looking too good.”

“If you thought the hoarding and shortages were bad in Q1 and Q2, they’re going to be way worse in the holiday season,” Kroes said.

“Retail inventories are still low, so we’re starting from a bad spot, but the general population is now much more aware of how bad it can be,” he elaborated. “The holiday surge in demand is just going to hurt things. The amount of hauling capacity is no better, so not only do fleets have to haul all of the toys and electronics and everything else that gets consumed during the holidays, they are still being asked to haul everything else.”

Kroes said the country could see rolling shutdowns if COVID-19 numbers continue to spike and may continue to do so throughout the holiday season as people travel and gather in groups.

“What we really need is government stimulus, especially if we start to see shutdowns,” he said. “I believe that we do need something to continue to put money into consumer spending, keep things from getting worse, especially with the shutdowns that might come.”