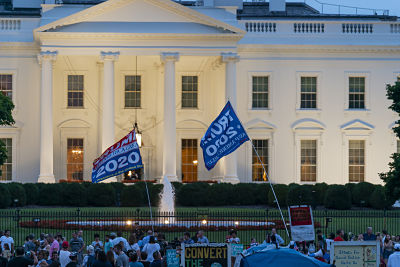 With Democrat Joe Biden now the projected winner of the White House, different sectors of the trucking industry are reacting to the 2020 presidential election.

Chris Spear, president, and CEO of American Trucking Associations (ATA) offered up his congratulations on Nov. 7.

“We congratulate President-Elect Biden and Vice President-Elect Harris on their hard-earned victory, and we look forward to working with their Administration to strengthen the economy and rebuild our national infrastructure,” said Spear. “Just like the great industry we represent; ATA is about getting the job done. While some exist in Washington to perpetuate problems, we come to the table prepared with solutions. We value sound data and honest dialogue. Above all, we commit to working with anyone willing to work with us. As the Biden Administration rolls up its sleeves and begins the heavy lift of rebuilding America’s ailing infrastructure, it will find a constructive partner in ATA. We stand ready, willing, and able to get the job done.”

Teamsters president Jim Hoffa said, “we want to congratulate President-elect Joe Biden and Vice President-elect Kamala Harris for their hard-fought victory. This union endorsed it because the Biden-Harris campaign put forward a bold pro-worker agenda that will enhance the ability of hardworking Americans to join together and collectively bargain for better pay and working conditions.”

“It is vital that every voter is heard in this campaign, and that is being done,” said Hoffa. “Our union worked hard to elect candidates that will stand with working families. We look forward to working with President-elect Biden to make our nation a better place for all working Americans.”

“With an office based in Washington, D.C., MEMA can provide resources, timely input, and feedback on potential laws and regulations that could impact the vehicle supplier industry. MEMA is committed to using our valuable knowledge and insight to help guide the Biden administration to develop effective, job-growing policies that will help strengthen U.S. competitiveness in the global marketplace,” said MEMA President and CEO Bill Long. “MEMA stands ready to work with the Biden administration and the new Congress to implement public policies that strengthen U.S. competitiveness and tackle strategic issues, including workforce readiness, technology development, and a 21st century infrastructure system.”

Not all factions of the industry were in a celebratory mood.

A group called StopTheTires2020, which touts more than 60,000 members, organized a truckers’ work strike on Nov. 11 to protest a possible ban on fracking under a Biden Administration.

“President Trump has worked diligently for four long years to protect the rights and freedoms of all Americans, and very importantly the blue-collar workers of this country. Without truck drivers, this country would not survive for long,” said StopTheTires Organizer Jeremy Rewoldt in a Facebook post.

“If our leaders to not respect that blue collar truck drivers are having to face domestic terrorism, primarily in democrat run cities all over the United States, and that we do not support the banning of fracking in any way, then we will have our second STOP OF TIRES for four full days.”

The Owner-Operator Independent Drivers Association (OOIDA), an organization that has been fighting to defend the rights of small business truckers since 1973, said the biggest issues facing truck drivers today are the parking shortage, insurance minimums, hours-of-service and others.

“There are always challenges for small-business truckers no matter who is in office or has the majority in Congress,” said Norita Taylor, director of public relations at OOIDA. “We look forward to working with whomever is in charge of the agency and hope to continue pursuing solutions to the issues affecting our members.”