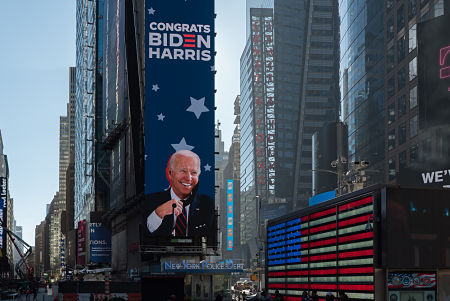 Momentum is gathering for a major investment into America’s crumbling infrastructure, according to American Trucking Associations’ CEO Chris Spear.

“Once the finest in the world, America’s infrastructure has instead become a visible symbol of our challenges of governance. In the coming months, the American Society of Civil Engineers will issue its updated scorecard on American infrastructure. The scorecard is sure to again document our lack of progress in meeting perhaps the most visible challenge a government faces: funding and financing infrastructure,” Spear co-wrote with Oregon Rep. Earl Blumenauer for The Hill.

“However, we are optimistic that the landscape is shifting. There is no issue on Capitol Hill with as much unity and cooperation than exists for infrastructure. Business and labor, truckers and bicyclists, transit agencies and highway users are all united on improving America’s infrastructure. These diverse interests have successfully created consensus within the halls of Congress, too, about the need to renew and rebuild America,” they wrote.

“I’ve been around long enough,” Biden said, “to know that infrastructure wasn’t a Republican or a Democratic issue.”

“The American people desperately want us to bring our roads, trains and bridges out of the last century and into the future,” said Carper. Carper pledged to work on a transportation bill that will focus on reducing greenhouse gas emissions by cars and trucks and boosting electric cars.

“I’m glad it’s at the top of the administration’s agenda. The current authorization bill for surface transportation expires in September, so there is no time to waste, ″ Carper said, adding that he expects bipartisan support for the reauthorization bill in the Senate.

ATA’s Spear and Rep. Blumenauer addressed the issue of funding.

“… As clear as the benefits are, the decades-long sticking point has been how to pay for it. Despite the fact that investments in infrastructure have a high economic multiplier, put millions of people to work at family-wage jobs, improve opportunity, and make America more competitive, raising revenues has been a stumbling block for Republicans and Democrats alike. This equation is changing. The pandemic has demonstrated the imperative of substantial investments in programs that stabilize communities, create jobs, and restore families from once-in-a-century economic damage. Several trillion dollars have been approved as an important down payment toward economy recovery. And as a next step, Congress must provide the president with the funds necessary for comprehensive infrastructure investment, and we believe all options should be on the table,” wrote Spear and Blumenauer.

“Transitioning to an equitable, modern solution for funding our infrastructure within the next decade is essential. This long-term vision will ensure that the United States remains an economic leader for the foreseeable future. We should look to consider a pricing program based on road use, paid for by people who have the capacity and the incentive to make the investments. At the same time, we may contemplate a slightly lower cost for rural and small-town Americans, while people pay more for the traffic congestion where it is caused,” they added.

A major infrastructure program would boost a U.S. construction industry still reeling from the effects of the global pandemic.

Since the pandemic began in February 2020, the U.S. has lost 256,000 construction jobs, lowering total construction employment to 7.4 million. Still, total construction spending has increased slightly to an annualized rate of $1.49 trillion, according to the Census Bureau. About a quarter of that spending comes from the federal, state, and local governments.

The Kinder Institute for Urban Research at Rice University recently released an analysis of infrastructure needs in 134 U.S. cities. Transportation, water, and climate projects were found to be the main priorities.

“Mayors and other local regional leaders around the country are very much in alignment with what President Biden has talked about, especially with climate change,” said Bill Fulton, director of the institute. “But it’s clear that the pandemic has changed infrastructure needs.”