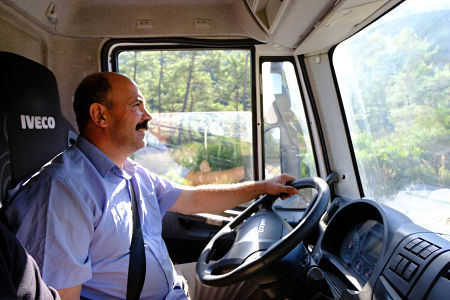 Facing a years-long shortage of drivers, American trucking firms are now looking beyond the U.S. to put drivers behind the wheel of their semis.

The reports are popping up all over the country.

Bloomberg reported this week that Oklahoma-based Groendyke Transport is looking for new drivers in South Africa.

The efforts to look outside the U.S. for drivers is not an original approach. In 1995, M.S. Carriers of Memphis, Tennessee attempted to hire 200 British truck drivers, but the Department of Labor (DOL) refused to certify them.

Schneider and J.B. Hunt have looked for drivers in Australia and in 1999, St. Louis-based Hogan Transports wanted to hire 100 drivers from Barbados. The DOL at first approved the hire but quickly reversed the decision.

For any industry to hire a substantial number of foreign workers, DOL must add that industry to a high-needs list to bypass certain immigration processes.

In March of 2019, the Bureau of Labor Statistics (BLS) published a report, “Is the U.S. Labor Market for Truck Drivers Broken?”

The report concluded that while the truck driver market was “tight,” employment in the occupation has been “resilient” and nominal annual wages have persistently “exceeded those of other blue-collar jobs with similar human capital requirements.

“, the market for truck drivers appears to work as well as any other blue-collar labor market, and, while it tends to be ‘tight,’ it imposes no constraints on entry into (or exit from) the occupation,” the report stated. “There is thus no reason to think that, given sufficient time, driver supply should fail to respond to price signals in the standard way.”

One source of new drivers the industry is considering is younger Americans.

The American Transportation Research Institute (ATRI) released results of the Phase 1 Beta Test of its Younger Driver Assessment Tool. This is the second in a series of technical memoranda from ATRI exploring the potential for an assessment tool to identify the safest drivers among 18–20-year-olds, a critical component of expanding interstate CDL eligibility to younger drivers.

Among the statistically significant findings, the drivers in the safest group based on their MVR and PSP data had the highest scores on Conscientiousness and Agreeableness, and the lowest scores on Experience-Seeking. Additionally, drivers in the “less safe” group exhibited marginally greater sensitivity to conflict in the Multi-Source Interference Task, indicating difficulties with cognitive control. While ATRI’s beta test only included sixteen drivers under the age of thirty, the assessment did show sensitivity to age-related variations in performance. The age sensitivity relationship to safety also materialized in older drivers with fewer years of experience, so the assessment tool is attempting to identify younger drivers with the cognitive and mental attributes of mature, experienced drivers.

“Given all the internal and external pressures on driver recruitment and retention, it is safe to say that the driver shortage crisis is not going away,” said Joyce Brenny, Brenny Transportation, Inc. CEO and Founder. “We need to find ways to expand the pool of safe truck drivers, and ATRI’s preliminary research indicates that safe, younger drivers can be found. At Brenny, our young driver apprentice program has a proven track record. Proper training and mentoring of young individuals who want to become truck drivers does work!”

Based on the success of the beta test, ATRI is embarking on an expanded pilot test of the assessment to increase the sample of younger drivers and expand the range of participating driver safety performance.

Industry groups for years have warned of a workforce shortage in trucking, particularly for long-haul truckers who pick up and deliver across state lines. In the year before the COVID-19 pandemic, the industry was short nearly 61,000 drivers, according to the American Trucking Associations, the nation’s largest group representing the industry. The association estimates a shortage of 160,000 drivers by 2028.