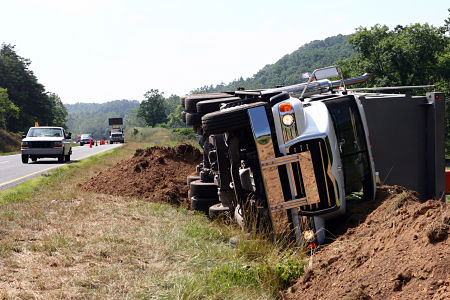 Mechanical engineer Steve Krug, founder of startup Axicle Engineering, developed a fifth-wheel tractor anti-roll system (TARS) that senses a tractor-trailer rollover before it happens and detaches the trailer from the tractor, allowing it to roll over on its own while keeping the truck driver safe in the cab.

“Our impression of the Axicle fifth-wheel prototype is that it is a game-changer for the transportation industry,” said Ryan Scott, a risk manager with Kysar Millennium Leavitt Insurance. “It can protect the two most important assets for a fleet owner: first and foremost, the driver, from potentially devastating injuries or loss of life from a turnover accident; secondly, the cab itself, which is an expensive item to replace or repair after a rollover accident.”

Krug, a former Tesla engineer with a background in aerospace engineering, founded the company to reduce highway deaths and injuries.

Large truck rollovers killed more than 300 people in 2019. Another 9,000 people are injured in Class 8 truck rollovers in the U.S. each year, according to the Insurance Institute for Highway Safety (IIHS).

TARS looks a fair bit like most fifth-wheel setups from the top, with its cast steel top plate and trailer locking mechanism. It can handle 55,000-lb (25,000-kg) loads, it’s easy to use with a low-effort handle for coupling and decoupling, and it’s got a visible pin that pops out when the kingpin is properly latched.

Not wildly dissimilar to a regular fifth wheel from above, the TARS system packs in a suite of sensors, a fast-acting brain and a life-saving quick-release system that could save bulk money for trucking companies and insurers as well.

But it’s also got some extra smarts built in, with sensors collecting all kinds of operational parameters, including load, vibration, wind, and trailer coupling information and a high-fidelity inertial measurement unit. If the TARS system detects a rollover incident, it fires its pneumatic- or pyro linear-actuated anti-rollover release mechanism in the space of a millisecond and drops the trailer off the back of the truck, according to a report in NewAtlas.com.

Krug told New Atlas that the TARS system has the potential to be a huge winner not only for truckers, but for the trucking companies themselves and the insurance companies that have to pay out on the damage and trauma caused by these accidents. “We have had verbal estimates from leading insurance companies, that this technology will save US$2K-$3K each year per semi-truck on insurance premiums, where the product itself will cost around $4K,” he says. “So, it makes you money in under two years, even before it eliminates any rollovers.”

The TARS system has been prototyped and tested at one tenth scale. A full-scale prototype has been tested with low loads, and by the end of the year, Krug says a production-ready prototype will undergo full-scale testing with heavy loads. The company has the seed funding to get it to that point, and its series A funding round is “mostly secured upon success of the full-scale testing.”

Axicle says it’ll have full-size prototypes undergoing heavy-load testing by the end of the year, and if all goes well, funding is nearly sorted for full-scale production to begin.

“Once we demonstrate a successful full-scale test and conduct more rigorous testing, we’ll build a high-volume production line, that down the line, will ultimately be able to output 100,000+ units per year,” says Krug. “We believe our technology will become a standard for all fifth wheels in the future, as it prevents more injuries than rollover bars for convertibles.”

Axicle says the TARS system uses a series of built-in, rugged sensors monitor the roll angle and rate of the tractor every millisecond. This algorithm can detect the trailer’s threshold limits with 99.99 percent accuracy.

Krug told Trucker.com that Axicle has two pending patents covering the fifth wheel’s release mechanism hardware, software, controls, and trailer aerodynamics. It is currently trying to raise $10 million in funding to back an initial production run of 10,000 units. If all goes to plan, Krug anticipates producing about 80,000 fifth wheels per year.