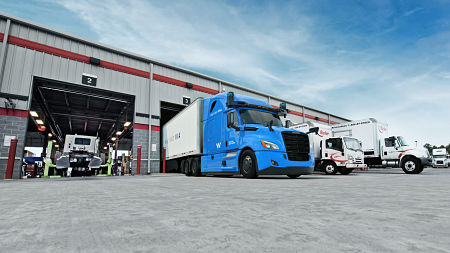 Ryder System and Waymo Via have formed a partnership to provide best-in-class maintenance for Class 8 autonomous trucks to establish a national footprint.

Ryder System is a leader in supply chain, dedicated transportation, and fleet management solutions and Waymo Via is the trucking and local delivery unit of Waymo, an autonomous driving developer.

“While this partnership initially focuses on fleet maintenance, we see many opportunities to collaborate on autonomous trucking operations in order to successfully deploy these trucks at scale,” said Karen Jones, chief marketing officer and head of new product development for Ryder. “Already, we’ve collaborated on the layout and design of Waymo’s new Dallas facility to ensure it’s optimized for serviceability of trucks and for the transfer hub model they plan to pursue in the near future. Autonomous Class 8 technology is quickly taking hold, and Ryder is poised to become a leader – not only in servicing trucks but also in managing the unique logistics of autonomous operations.”

With a growing fleet and geographical footprint, Waymo Via needs a robust and scalable solution for truck maintenance. Ryder has a network of more than 500 maintenance facilities in the U.S. and nearly 90 years of fleet maintenance expertise. The two companies will partner on servicing and evolving maintenance practices for autonomously driven trucks across Waymo Via sites in Texas, Arizona, California, Michigan, and Ohio, as well as roadside service between hubs.

Waymo brings over a decade of experience in building autonomous driving technology, having driven more than 20 million miles on public roads across 10 U.S. states and 20 billion miles in simulation.

“As we continue to scale our autonomous trucking operations, we couldn’t have found a better partner than Ryder,” says Charlie Jatt, head of commercialization for Waymo Via trucking. “There are many synergies between our Waymo Via vision and operations and Ryder’s expertise and resources, and we look forward to unlocking best-in-class solutions within the industry and bringing autonomously driven trucks to market throughout the U.S.”

Waymo is one of an army of companies working to get autonomous trucks on the highway.

For U.S. Xpress CEO Eric Fuller, the deployment of autonomous trucks is not a question of if, but when.

“I think it’s going to happen,” he told Transport Topics. “I think the question mark still even today is the timeline.”

U.S. Xpress is among the first trucking companies involved in the testing and development of self-driving trucks. For the past few years, the truckload carrier has been working with ­TuSimple, which is using its test fleet to haul freight for some U.S. Xpress shipper customers on select lanes.

“It’s very small volumes, but we anticipate over the next three to four years ramping that up significantly, and hopefully by 2024 or 2025 actually operating autonomous units ourselves,” Fuller said.

He does not see this technology as a threat to the trucking industry’s workforce.

“We have a core group of drivers that are career truck drivers, and those drivers are not going to be affected by this in any form or fashion,” Fuller said. “They’re going to be able to make a living just like they do today.”

Instead, he sees potential for autonomous trucks to help reduce the industry’s high rate of driver turnover, particularly among new hires who too often exit the industry just months after entering it.

“Hopefully by having this type of technology, we can minimize the need for that type of churn, but the true career truck drivers are not going to be impacted negatively,” Fuller said.

U.S. Xpress Enterprises, based in Chattanooga, Tenn., ranks No. 24 on the Transport Topics Top 100 list of the largest for-hire carriers in North America.