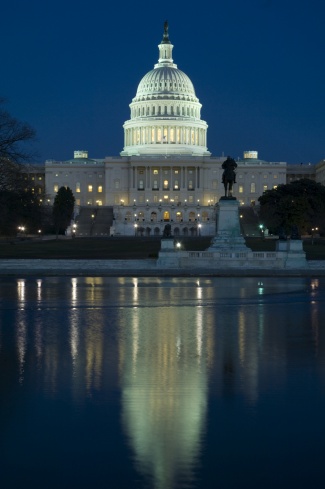 The recent stalemate in Washington over the Affordable Care Act has put the nation’s largest trucking association at odds with Tea Party elements of the Republican Party.

Bill Graves, chief executive officer of the American Trucking Associations (ATA), told attendees at the organization’s recent annual meeting in Orlando that, “if I was your political broker, my advice would be to sell your Republican shares and buy the Democrats.”

Graves said despite the political battles being waged, trucking will continue to play a central role in the U.S. economy.

“Trucking is a core building block in the economic foundation of America,” he said. “We stand along with working men and women, the entrepreneurs who are willing to put capital at risk, with plants and equipment, energy, water, chemicals – all the fundamental elements that make up the economy.”

Graves said the shifts in the political winds will affect the trucking industry. “Political change is underway and many of the traditional allegiances the business community has had with the Republican Party are necessarily going to be re-evaluated,” he said. “While it’s appropriate, and there is certainly merit in advocating for reduced government spending, smaller government, reducing our debt, limiting regulations and controlling the reach and intrusive nature of the federal government – insisting on having things their own way, without a hint of willingness to compromise and threatening to ‘burn the house down’ otherwise, is a combination of foolish, ill-advised, reckless and detrimental actions to the future of this country,” he added.

Graves’ controversial remarks reflect a growing frustration over a lack of support for federal transportation legislation, which moves front and center in Congress in 2014 as a two-year stopgap measure passed in 2012 expires.

LaHood predicts there will be 30-40 Republicans who will block a long-term bill in 2014, forcing a one-year extension.

A 2012 analysis by the American Road & Transportation Builders Association (ARTBA) found that 60 percent of all U.S. transportation spending goes to roads, which accounts for 16 percent of gross domestic product.

“A very significant portion of the cost of U.S. goods is directly related to the cost of highway transport,” the report concluded. “To improve U.S. competitiveness, a high-quality national highway and bridge network is essential.”

Bruce Josten, executive vice-president of the U.S. Chamber of Commerce, said the Chamber has worked unsuccessfully for years with the AFL-CIO to reach consensus on a higher gas tax.

“Everybody in town – the administration, the Republican Party and the Democratic Party – refuses to belly up to the reality that you need to fund infrastructure. We and the unions and others have been calling for more than a decade to raise the user fee,” he said.

The Arlington, Virginia-based ATA’s political action committee contributed $724,500 to federal candidates in the 2012 elections, with 78 percent of that going to Republican candidates, according to the nonpartisan Center for Responsive Politics.

Graves said the top priority for ATA is getting new revenues for transportation.

“Our No. 1 issue is getting a package of infrastructure investment. We know how expensive tolls are. We know the answer is a fuels tax. That’s a fairly straightforward conversation to have with a member,” he said.

It has been 20 years since the federal gas tax was raised to its current 18.4 cents-per-gallon. The American Association of State Highway and Transportation Officials (AASHTO) say it would take another 10 cents-per-gallon to bring the transportation trust fund back to solvency.

Last year the government transferred $18.4 billion from general funds to the highway fund to meet needs for highways, bridges and transit construction.

“This industry’s biggest obstacle to success is not the railroads; it’s not the political environment or the policy and regulatory environment in Washington, D.C. or state capitols. It’s not the high diesel fuel prices or an anticipated shortage of drivers. The biggest challenge we face will come from the incredible diversity of our industry and the easily fragmented constituency that we are,” he added.