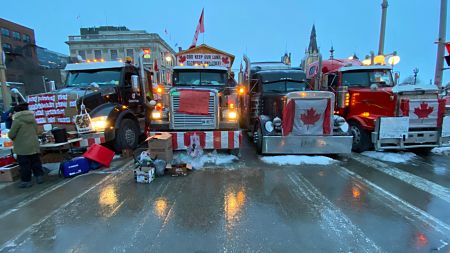 A Jan. 22 federal requirement that travelers entering United States ports of entry at the Canadian and Mexican borders be fully vaccinated against COVID-19 sparked strong reaction from some Canadians.

Dubbed the Freedom Convoy, the protest movement leaders are saying they will not leave until all mandates and COVID-19 restrictions are gone. They are also calling for the removal of Prime Minister Justin Trudeau’s government, though it is responsible for few of the measures, most of which were put in place by provincial governments.

Protestors are calling for the U.S. to stop interfering in the domestic affairs of America’s neighbors. The protests have caused disruptions across Canada, especially in the capital, Ottawa, and Toronto, the nation’s largest city.

The mandate applies to foreign drivers entering the U.S. but does not apply to U.S. drivers. However, Canada and Mexico have similar regulations in place that do impact U.S. drivers — including truck drivers — who make cross-border runs.

In a letter to ATA members, Costello outlined some of the details.

“Foreign national drivers will be required to demonstrate proof of being fully vaccinated as outlined by the U.S. Centers for Disease Control and Prevention,” he said. “Fully vaccinated means having two doses of an acceptable vaccine two weeks prior to entry into the U.S. or one dose of an acceptable vaccine that only requires a single dose, such as the Johnson & Johnson vaccine, two weeks prior to entry,” Costello said. “There is no testing requirement to enter the U.S.; however, those who have symptoms may be referred to the CDC for a medical evaluation.”

There is “no sign whatsoever” that the volume of transport trucks crossing the Canada-U.S. border has decreased because of the vaccine mandate imposed on truck drivers, according to Canadian Transport Minister Omar Alghabra in a report in Transport Topics.

“It is clear to all of us that this mandate has not had a measurable impact on the volume of traffic crossing our borders,” he said.

“The first week of the mandate, even though there was a massive snowstorm, even though it was a U.S. holiday, we had almost 100,000 truckers cross the border, and this second week we saw a continuation of this trend. So, there is no sign whatsoever that the mandate has had an impact on the volume of trucking crossing the borders.”

According to the office of Public Safety Minister Marco Mendicino, 105,100 trucks crossed the border between Jan. 20 and Jan 26, a slight drop from the 105,817 trucks that crossed during the same period in 2019.

Truckers travelling within Canada are not affected by these new measures, although the federal government has said it is working on an interprovincial mandate for truckers.

Alghabra spoke after he and other cabinet ministers met with business and industry leaders and associations to discuss Canada’s supply chain woes and produce potential solutions.

Alghabra announced that, in the coming weeks, federal ministers would be meeting with regional and industry groups to talk about how their supply chains have been affected by the pandemic, according to a report on Yahoo.com.