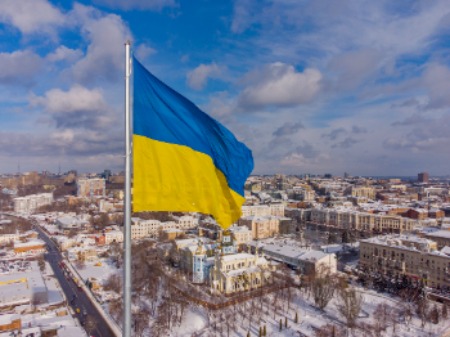 When Russia invaded Ukraine, it triggered a humanitarian crisis of monumental proportions. Cities have been devastated and millions forced to flee from their homes. Thousands of innocent civilians have lost their lives.

As expected, international relief agencies such as Save the Children, International Red Cross, and the United Nations Children’s Fund, among others, have rushed into the fray, providing food, shelter, clothing, and financial assistance to the new refugees.

The transportation industry, including trucking, has been front and center in the relief effort.

Organizations such as the Trucking Cares Foundation, Trucking & Logistics Professionals for Ukraine, UPS Foundation, FedEx Corp., Union Pacific, Pilot Company, and others have already contributed millions toward relief efforts, according to a report in ttnews.com.

“The war unfolding in Ukraine is a terrible tragedy,” said Trucking Cares Foundation Chairman Phil Byrd. “The trucking industry stands with the Ukrainian people and we’re proud to do even a little bit to ease their suffering.”

“The Trucking Cares Foundation was established to help mobilize the trucking industry in response to disasters,” ATA Chairman Harold Sumerford Jr. said. “Providing relief and comfort to Ukrainians suffering as a result of this war is something we are called to do.”

“The UPS Foundation and UPSers around the world are sending goods, money and services to Ukrainians as quickly as possible during this humanitarian crisis,” said Nikki Clifton, president of social impact at The UPS Foundation. “We are also linking our efforts throughout our global public-private partnerships to accelerate humanitarian aid through as many channels as we can influence.”

FedEx Corp. committed more than $1.5 million in relief aid to provide humanitarian assistance to those impacted by the conflict, including a $550,000 cash donation to nonprofits. An additional $1 million has been allocated for in-kind shipping to nonprofit partners working to transport critical supplies.

Union Pacific made its largest-ever corporate disaster relief donation of $500,000 to support humanitarian relief efforts. The donation was split evenly between the American Red Cross and Save the Children. Employees helped raise the money after the company announced it would match their contributions two to one.

“Our hearts are with the Ukrainian people who did nothing to provoke this attack and whose lives are irrevocably changed,” said Union Pacific Chairman Lance Fritz. “Our employees’ charitable donations clearly demonstrate they’re taking a stand with the Ukrainian people, and we’re proud to let their generosity guide our corporate contribution to two of many worthy organizations providing immediate aid.”

Pilot Co. launched a fundraising effort in recognition of the growing humanitarian crisis. The in-store campaign allows its customers to round up their purchases with the difference going to Save the Children. The campaign involved 650 participating company-operated travel centers and ran through April 3.

“We are deeply saddened by the effects of this conflict and are doing a round-up in our stores to help raise funds for Save the Children that will go toward immediate assistance for Ukrainian children and families,” said Pilot CEO Shameek Konar. “We will be matching up to $100,000 of donations raised as part of our commitment to giving back to our communities on a local and global scale.”

GP Transco Vice President of Business Development Sergey Bort and CEO Dominic Zastarskis contacted trucking and logistics industry stakeholders to help in the cause. The Joliet, Illinois-based duo launched a fundraising campaign that quickly swelled into the six-figure range in a matter of a few days. Bort said the company so far has raised $350,000, all of which will go toward Ukrainian humanitarian aid, according to a report in freightwaves.com.

“The people of Ukraine are currently in dire need of assistance, and we want to do everything in our power to bring humanitarian aid to them. We started by reaching out to the trucking companies near us in Illinois; with 15 companies currently on board, we are in talks with two dozen other companies in our industry,” Zastarskis said. “The people of Ukraine need our help. We don’t have ties to Ukraine nor an office there. It just seems like the right thing to do.”

Zastarskis, a native of Lithuania, and GP Transco are working with the Lithuanian government on distribution of the funds to avoid the money becoming military aid, as their goal is that it reach the people affected by the ongoing war.

The Ukraine crisis has displaced more than 6.5 million people since February 24 with more than 400,000 children currently living in the conflict zone. Child poverty rates are up more than 57 percent in the Donetsk and Luhansk regions of Ukraine, according to savethechildren.org.