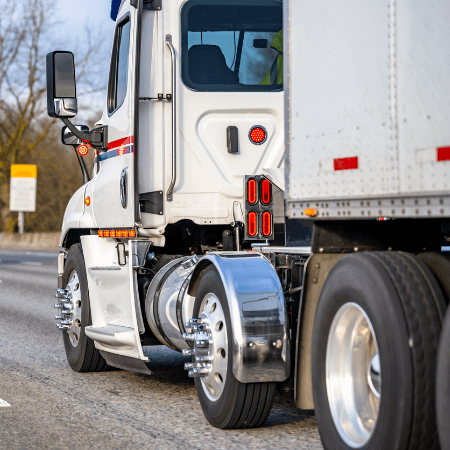 Runaway inflation has hit most Americans right in the pocketbook – but small, independent trucking firms are taking the brunt of the blow.

The price of a used commercial truck has doubled in the last year, affecting the bottom line of hundreds of thousands of small trucking firms.

According to the Federal Motor Carrier Administration (FMCSA), there are about 275,000 trucking companies in the U.S., with a whopping 86 percent of them falling into the small firm category – with six or fewer trucks. There are only 120 companies with fleets larger than 1,000 trucks.

Since the pandemic, mom-and-pop fleets have been booming, with at least 10,000 new companies hitting the road since early 2021, according to report in Freightwaves.com.

The small firms grew by 7.7 percent since last year while the big trucking firms have grown by only 1.2 percent.

But where are they getting the trucks?

Supply chain bottlenecks and parts shortages have limited the new truck supply, not to mention the cost. Large firms trade out used trucks for new ones and sell the old ones to the small firms.

Larger trucking companies have been using their outsized used equipment sales wins to offset other headwinds in the industry: increasing wages, insurance premiums and, as of this year, a record upswing in diesel fuel costs.

“There are funding sources lined up to loan money to buyers, even at the record high prices we are seeing,” he said. “Lenders are definitely asking for larger down payments and higher monthly payments, but with record high freight rates, borrowers can pay more and still make better money.”

So, even as a shortage of drivers impacts certain trucking segments, the rise in drivers quitting for-hire firms to strike out on their own is growing.

“With no data, I would have to say that the overwhelming majority of used truck sales this year have been to owner-operators and small fleets, many of whom are new entrants seduced by the profit motive,” Tam said.

Executives at Phoenix-based Knight-Swift, the No. 3 largest U.S. trucker, acknowledged some of that dynamic in an April 20 call to investors.

“Talking about the used equipment market, those that have ventured in to grow their truck count from a small carrier perspective, their cost structure is very different to where it has ever been,” said Adam Miller, CFO, and president of Swift. “And so, they can only afford to drop rates to a certain level before they exit our space, because they’re buying equipment that is probably three to four times what they would have purchased in the previous cycle. So that’s one thing to watch really closely.”

“We’re not supplying or enabling small carriers to affordably come in and add capacity,” said David Jackson, CEO, and president of Knight. “And the limited number of used trucks we are selling, in some cases, we’re selling these for as much or close to what we paid for them brand new before we put 450,000 or 500,000 miles on the trucks.”

Knight-Swift sold nearly $35 million of used equipment the first three months of 2022 alone, up from $10.5 million over the same period last year.

He said the commercial truck industry continues to deal with tight supplies of semiconductor microchips and other production inputs, which have limited the number of new trucks OEMs can build. Like the light-duty market, most OEMs expect that microchip availability and new-truck production will improve throughout the year. Commercial truck order backlogs have limited the number of new orders OEMs are taking, even though demand for new trucks continues to be strong.

J.D. Power Senior Analyst and Commercial Vehicles Product Manager Chris Visser told ccjdigital.com there’s a lingering sense of urgency in the auction lanes, “with buyers continuing to pay record pricing for desirable trucks. We’ll be keeping our eye out for an increased number of model-year 2019 trucks in the auction lanes in upcoming months as those units turn 4 years old,” he said.

“Otherwise, shipping backlogs and parts shortages have remained as critical as ever, instead of improving somewhat as we had predicted last year,” he said. “This factor combined with superheated consumer spending are keeping used truck pricing in the stratosphere.”