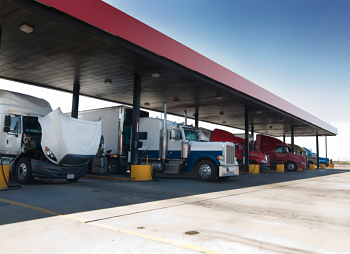 Diesel gas prices have soared to new heights across the country, putting the squeeze on small trucking firms and independent drivers trying to watch the bottom line.

According to AAA, the average price of diesel in California pushed past $6.60 per gallon.

“Gasoline prices have continued their rally in the last week with oil prices sustaining higher levels, but the real story has been diesel fuel, which has skyrocketed to its highest level ever seen,” said Patrick De Haan, head of petroleum analysis at GasBuddy. “Diesel is now $1 per gallon or more in many areas compared to gasoline. The meteoric rise in diesel prices is likely to continue for the first half of the week at least, while gasoline prices could continue to see a slow but steady rise.”

“For now, the rising cost of diesel will surely be felt in the grocery store, hardware store or on your next flight as jet fuel prices accelerate, leading to a continued rise in inflation likely to ripple across the economy.”

A recent Yahoo/Maru Public Opinion survey from April 29-May 1, 2022, asked a random selection of 1,392 U.S. drivers how gas prices were impacting their lifestyle and travel choices.

Drivers with smaller trucking companies, which transport key goods and supplies across the country, say it is getting harder for them to fill their tanks as the price of diesel soars higher by the day.

The added financial woes for independent truckers risk worsening the supply chain crisis because some consider parking their big rigs for good.

Though all drivers have faced higher fuel prices at the pump since the Russian invasion of Ukraine disrupted the energy industry earlier this year, diesel prices have been growing at an even faster rate than regular gasoline.

“Fuel is the single largest expense for a small business trucker,” Norita Taylor, spokesperson for the Owner-Operator Independent Drivers Association (OOIDA), said in an email. “Sudden jumps in price can be challenging to deal with. Some are able to mitigate with fuel surcharges but not all, such as independent truckers that work with brokers,” according to a report on washingtonexaminer.com.

“Independent truckers and small trucking companies are particularly hurt by this crisis,” Ron Faulkner, president of the California Trucking Association, wrote recently in the Fresno Bee. “These companies operate in markets which do not always compensate for the increased cost of fuel.”

“The impact to small fleets is especially concerning because more than 95 percent of the trucking companies in the country operate 20 or fewer trucks,” Faulkner added. “These companies are the backbone of the industry and are struggling to keep up with out-of-control costs.”

Rapidly growing fuel expenses risk putting small trucking companies out of business and taking trucks off the road at a time when labor shortages in the industry are already wreaking havoc on the global supply chain, which has struggled to keep pace with demand since the start of the COVID-19 pandemic. Store shelves have been left bare in some places, and access to crucial building materials has been limited, among other things.

“Look around your house or your office. Everything in it, from the food in your fridge to the chair you are sitting in, to the phone or tablet on which you may be reading this article, was brought by a trucker,” Faulkner wrote. “And despite much progress on alternative fuels, diesel still fuels 97 percent of the big rigs on the road today.”

The growing costs of running a trucking business are also linked to the sky-high inflation levels consumers have seen across a range of goods and services.

“To cover the increased cost of diesel, truckers must increase the rates charged to haul freight,” Faulkner said. “These increased rates are then passed on to consumers via higher costs at the retail level. So, you are paying for high prices of fuel both at the pump and at the grocery checkout line.”

The U.S. Department of Labor has reported record-high inflation rates in recent months, both in costs to producers and consumers. In the last year, the consumer price index has risen 8.5 percent before seasonal adjustment — “the largest 12-month increase since the period ending December 1981,” the Bureau of Labor Statistics said last month.