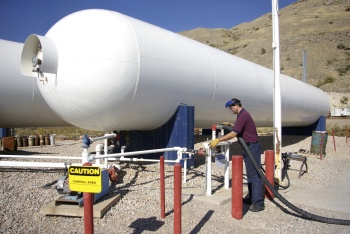 Some of the largest trucking fleets in the United States are starting to make the shift from diesel fuel to natural gas.

Companies such as Lowe’s, Proctor & Gamble, United Parcel Service and FedEx are accelerating a shift to natural gas fueled trucks, betting that higher prices for diesel over natural gas will continue.

According to the U.S. Department of Energy Alternative Fuels Data Center, diesel was selling for roughly $3.50 per gallon this past summer while compressed natural gas (CNG) was hovering at $2.00 per gallon.

An abundant supply of natural gas is helping companies make the switch for their fleets. Another factor is a new generation of gas engines that can power trucks weighing up to 40 tons.

A significant shift to natural gas would have long-range impacts to the trucking industry as well as the U.S. consumption of oil, domestic energy industry and air quality. Natural gas produces less carbon dioxide, carbon monoxide and sulfur-based pollution than diesel or gasoline per mile driven.

“Within five years, 30 percent of our fleet could be natural gas,” said Ike Brown, president of NFI Intermodal, which provides deliveries to Lowe’s in Texas and has some 2,200-trucks in its fleet.

“It’s cleaner than the average truck running today,” said Steve Palmer, vice president of transportation for the Mooresville, N.C.-based Lowe’s. “It’s a long-term play that could save a lot of money.” The retailer plans to have 100 percent of its fleet on natural gas by 2017.

Other classes of commercial trucks have already made the switch. This year, about 60 percent of all new garbage trucks purchased use natural gas.

“It would be a big gamble to flip to natural gas if we thought it was going to flip back to diesel being cheaper,” said Waste Management’s Chief Executive David Steiner. “But as far out as we can see, we think you are going to have lower gas prices and higher diesel prices.”

Clean Energy Fuels, the largest natural gas fueling station company, is working on expanding the natural gas infrastructure.  The Irving, Texas-based company, founded by oil man T. Boone Pickens, has more than 400 fueling stations and is building a network across the country. Recently the company offered a deal through General Electric’s leasing arm that allows trucking companies to lease a new vehicle for the same price as a diesel if they agree to a fuel contract.

“This is just one of the last barriers,” said the president of the company, Andrew Littlefair. “Now they can start saving money immediately.”

TravelCenters of America and Shell are on track to open the first five liquefied natural gas fueling centers in the U.S. in the first half of 2014.

Another obstacle is the price of trucks equipped to run on natural gas.

CNG trucks cost between $40,000 and $50,000 more than a diesel truck, which costs about $120,000, primarily because of the large carbon-fiber fuel tanks required to store CNG or liquefied natural gas. In large fleets, that premium could add millions of dollars to equipment cost.

Still, trucking companies see longer term benefits. Ryder Systems Inc., one of the largest buyers of trucks in the U.S., is quickly adding natural gas to its 50,000-truck fleet, but just how fast it will grow depends on how much truck prices come down and how fast fueling stations pop up, said Scott Perry, vice president of supply management, for Miami-based Ryder.

“I think 10 to 20 percent is realistic within five years. But we still have to see about all the variables.”