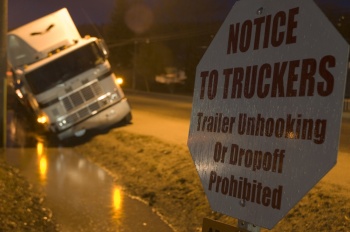 “Every fatality on our nation’s highways is a tragedy, and we all have an obligation to improve highway safety.  Unfortunately, the data released by NHTSA is a misrepresentation of our industry’s improving safety record,” said ATA President and CEO Bill Graves. “When the public hears the term ‘large truck,’ they naturally think of the millions of large tractor-trailers that deliver their most essential goods. However, this data lumps those tractor-trailers in with millions of smaller, non-freight-hauling vehicles whose crash rates are higher than in the trucking industry. The federal government should not be so casual with its terminology and should provide further information and clarity to the public.”

“ATA, along with the trucking industry, has a deep commitment to improving safety on our highways,” said ATA Chairman Phil Byrd, president of Bulldog Hiway Express. “That’s why ATA has pushed the federal government to limit truck speeds and require electronic logging devices for large trucks, as well as lobbying for improved enforcement of traffic rules around our large trucks so we can all arrive at our destination safely.”

“The highways are our workplace,” said Dale Williams, a Share the Road professional driver for Trimac Transportation. “So we all need to do our part to share the road safely. That means allowing for proper following distances and safe passing, as well as abiding by all posted speed limits and other rules of the road.”

U.S. Secretary of Transportation Anthony Foxx said the numbers reveal that the U.S. still has a lot of work to do when it comes to overall traffic safety.

“Highway deaths claim more than 30,000 lives each year and while we’ve made substantial progress over the past 50 years, it’s clear that we have much more work to do,” said Foxx. “As we look to the future, we must focus our efforts to tackle persistent and emerging issues that threaten the safety of motorists, cyclists and pedestrians across the nation.”

In addition to trucking, the report included other key 2012 statistics:

“As a public health and safety agency, any increase in the number of deaths is cause for concern. While we’re seeing some unfortunate trends, we’re also seeing progress in some parts of the country,” said NHTSA Administrator David L. Strickland. “We will continue to work closely with our federal, state and local partners to change the way motorists behave on our roadways and build public awareness of key issues that have the potential to save many lives.”